Arrived in Bodean a distance of 23 Ria. My feet feel frozen hard. Snowed all day. Wet through. Am in old German Barracks. No fires or anything. Room made for eight men now holding fifty-three men. Air reeking of hot damp clothes drying and on sweaty bodies. The front seems near.

The Long March (or Death March)

In January 1945, as the Soviet armies resumed their offensive and advanced into Germany, many of the prisoners were marched westward in groups of 200 to 300 in the so-called Death March. Many of them died from the bitter cold and exhaustion. The lucky ones got far enough to the west to be liberated by the American army. Others were ‘liberated’ by the Soviets, who instead of turning them over quickly to the western allies, held them as virtual hostages, some for several more months. Many of them were finally repatriated towards the end of 1945 through the port of Odessa on the Black Sea.

We started marching out of Poland and towards Germany at one o’clock in the morning in the dark. We came across a big barn that they put us in and it was during this confusion that I saw an opportunity to take off. It wasn’t necessarily a wise decision because I didn’t have time to think it through. I instinctively thought here’s a chance to get out and I took off. I ended up in a pig sty of all places where I huddled and watched as the rest just carried on marching away in the dark.

We were dragged out at 0500hrs this morning and set off. No snow fell today. Road deep in snow 12 to 14 inches (approximately thirty-five centimetres) or more. Arrived at a point 17 kms from our start. Herded into hay barn for tonight. German Officer forbidden us to smoke in case we set fire to the building. If this should happen he said the doors will stay barred and we can stay in there and burn. He means it too. (Nice chap). Many can walk no further their feet are so badly blistered. They are to stay behind. I hope they don’t shoot them. A German guard just gave an order from the Commander, that we move off at 0200hrs. Now 9 o’clock. Will have 5 hours sleep perhaps if I don’t die of cold. My pal has a thermometer with him tonight it is 31 degrees below zero. I don’t think we will sleep it is too cold. Can hear gun fire.

Glory be I am free. At least for the moment. In the dark and confusion, this morning when they were lining us up some sick men were sent back through the guards to a store room used as sick room situated in the middle of pig stys. Instead of going into the sick room I turned left and moved in with the pigs. I lay down where the pigs had a bit of straw. The pigs were undaunted they came back and slept beside me. It was the warmest I had been since leaving camp. I’m now hiding in a cellar under a deserted house. Terribly cold. Have plenty of food such as potatoes etc. Not very nice cold. German troops are moving through the area on foot. Machine guns are blazing just over the ridge. 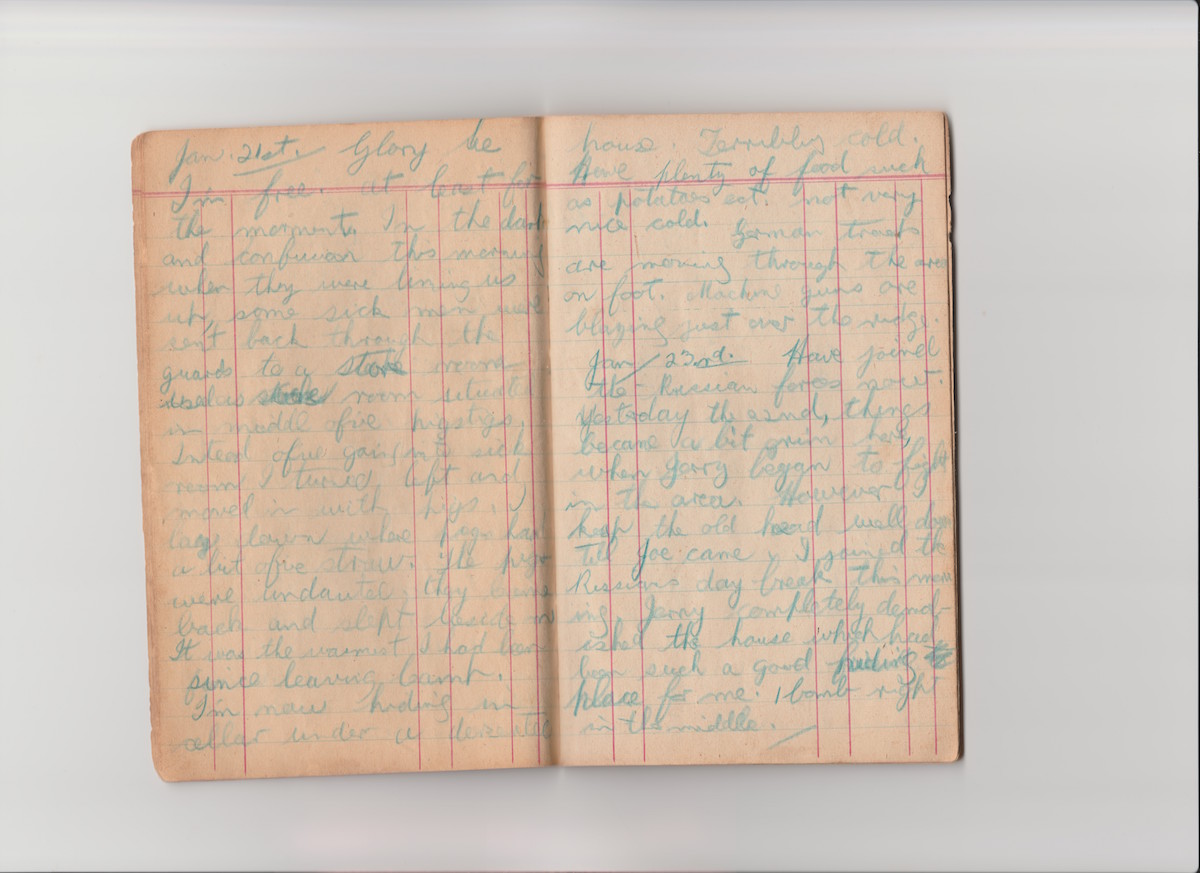 Diary pages: Glory be I am free!
The problem was the German bombers were flying very low, only about fourteen thousand feet (four kilometres approximately) above those marching and bombing anything that moved as they thought it was American. The rest of those marching were bombed by the Germans once or twice and a lot of men were lost, including the German Commander who ran the camp. No one dared touch a prisoner under his command – if they did they would have the Sergeant Major after them straight away. The German Commander had served in the First World War and was looking after us well in a funny kind of way. The bombers killed him in the march out and the others ran until they found the American army.

When I got out of the pig sty I was in no-man’s land, in between the Russians and the Germans and I found it wasn’t a good idea to leave. I tried to find a place that was safer as it wasn’t a safe place to be roaming. I came across another prisoner of war who had slipped away from the march and as we headed in the direction of the Soviet Army we came across many others from the camp. The Soviet Army eventually found us.

Have joined the Russian forces now. Yesterday the 22nd, things became a bit grim here, Jerry began to fight in the area. However, I kept the old head well down till Joe came. I Joined the Russians daybreak this morning. Jerry completely demolished the house which had been such a good hiding place for me. One bomb right in the middle.

Have seen Russian O.T been advised to stay put until all Germans are cleaned up in the area. This spearhead is now pushing on to Oppel and Breaslau and Berlin, says the Russian Officer. I wished him luck and declined his offer to join his Tank Corp.

Area all quiet. Terrific battles raging in the woods nearby. German civilians are bringing me plenty of food, as they are terribly afraid of the Russians. How they have helped me. 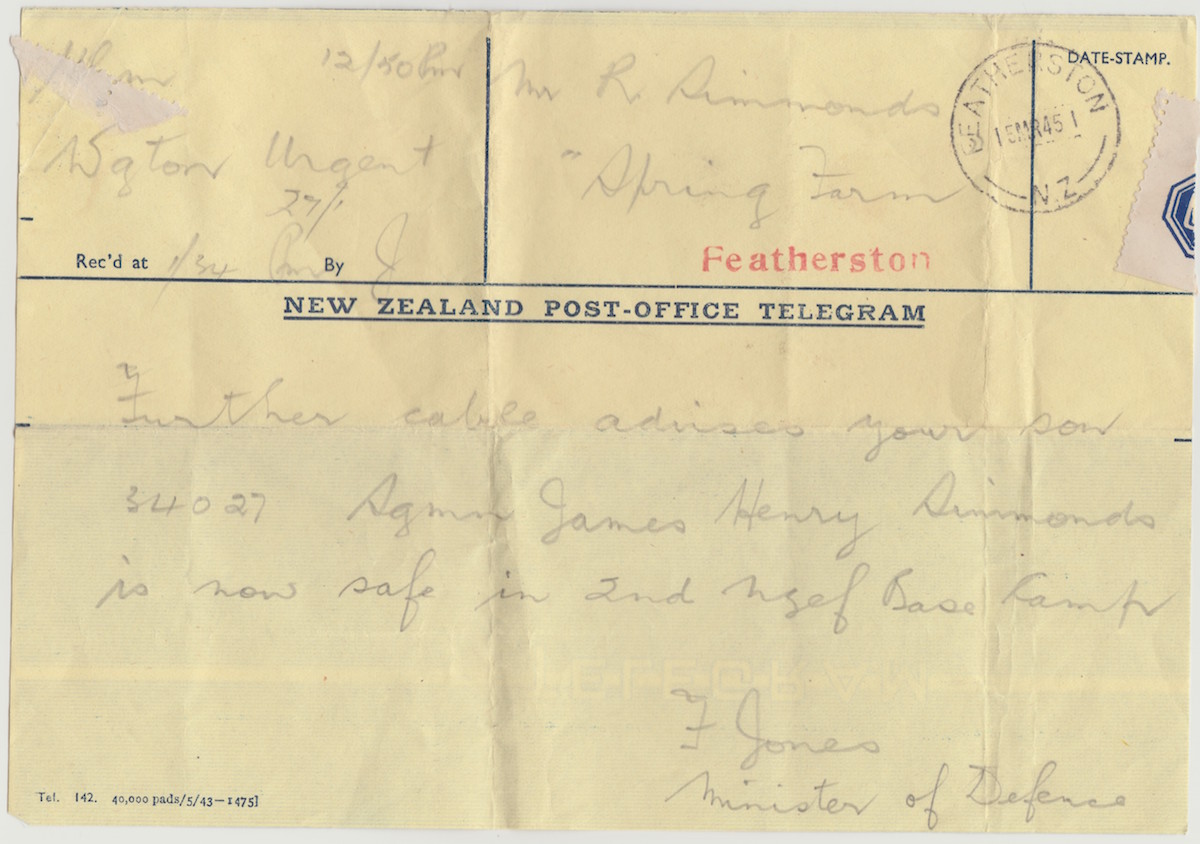 Telegram advising I am safe
It had been worth the gamble and the Russians treated us like lords. Apparently, Stalin had issued orders, “Australians and New Zealanders – you look after them. They’ve been fighting for Russia in the desert for three years.” Of course, Russia wanted to open another front to take the pressure off but our crowd didn’t want to do that and the Allies left Germany and Russia to fight it out together. The Americans supplied Russia with a thousand brand new tanks and a thousand-brand new spitfire fighter planes and they swarmed over everything. I along with about a hundred other New Zealanders stayed with the Soviet Army for about three months. 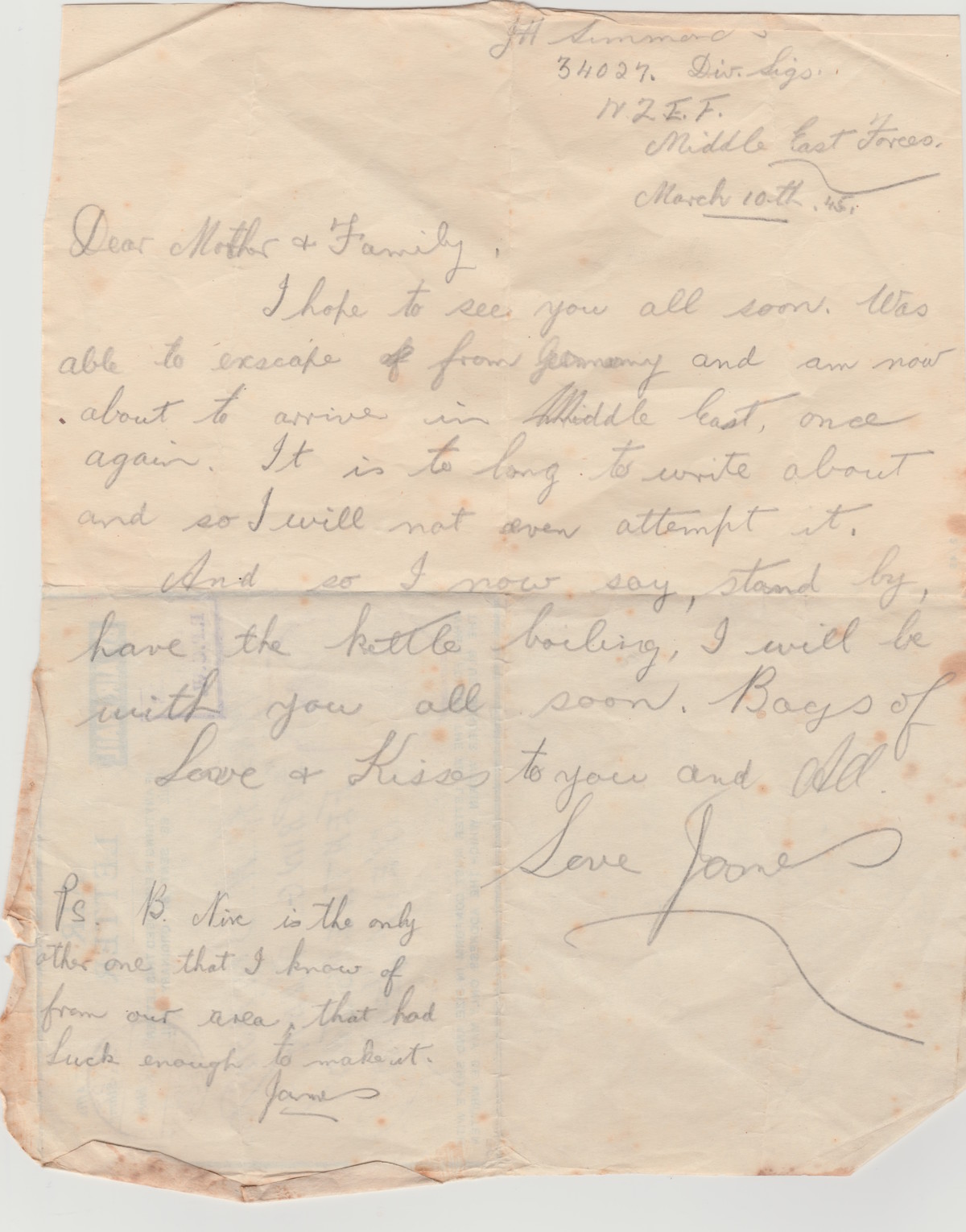 Letter I wrote home on my escape

One time the Germans drove their tanks right up close to the front line and left them there thinking it would be a good place to attack from. It snowed for six days and the tanks hadn’t been started during the entire time. The Russians knew the tanks wouldn’t be able to go as the oil and mechanics would all be frozen. In the middle of the night, the Russians came out with planks and lit small fires under the tanks to warm the oil and mechanics of the tanks enough to start them up. The next morning, the Germans woke up to find their tanks turned around facing the opposite direction and they still couldn’t start them. Up until then the Germans had everything going their own way.

Finally, I reached Warsaw where I caught a train to the port of Odessa on the Black Sea. The train ride took ten days and ten nights; it was slow because we spent a lot of time on the side lines waiting for other trains with troops and weapons and supplies, heading to the front line. On 8 March 1945, I reached Odessa and eventually got a berth on a British cargo ship headed for England via Cairo and Athens. I waited a while to join a boat to finally take me home. It was 1945 and I was twenty-five years old.

Have been given a passport to go to Glervize today by Russian O.T.

Conditions here are terrible. Hundreds of dead civilians litter the streets, all frozen hard. Tommy guns are roaring all night. The Germans are bombing the city. The area for many streets around the Main Stations is burnt out by RAF bombs. Radios are all confiscated. Martial Law is in force. Am leaving for Katowice tomorrow. Have a pass from O.C of area. No water or light or sanitation.

Arrived in Katowice today. Am billeted in Red Cross Centre. The refugees are a pitiful sight from the concentration camps etc. Nowhere to go, haggard and thin and forlorn they look. They can’t seem to realise they are free. The stories they tell are something terrible. They have all tattoo numbers on their arms given to all in concentration camps.

Have been here six days now. The town is in a terrible plight for food. Guns are still cracking continually all night as the Polish and Russian troops round up the Hitler Youth, False Dutch and soldiers who are hiding in the city. Have a pass to go to Krakow in middle of Poland. Will leave tomorrow by Polish Truck. Water and light is working here. The city not devastated like Glervize is. All the Polish girls who married German soldiers have been arrested and sent to Concentration Camps to work, or any other who has collaborated with the enemy in any way.

Arrived here in Krakow yesterday at 2200 hrs. Am staying in YMCA. Some talk about collecting all British troops here and transporting them out. Just have to wait and see what’s what.

Africa Star
For entry as part of an establishment into an operational command in North Africa between 10 June 1940 and 12 May 1943.

War Medal 1939-45
For twenty-eight consecutive days, fully mobilised service with the Armed Forces either in New Zealand or overseas between 3 September 1939 and 2 September 1945.

N.Z. War Service Medal
For twenty-eight days, full time service either in New Zealand or overseas between 3 September 1939 and 2 September 1945. 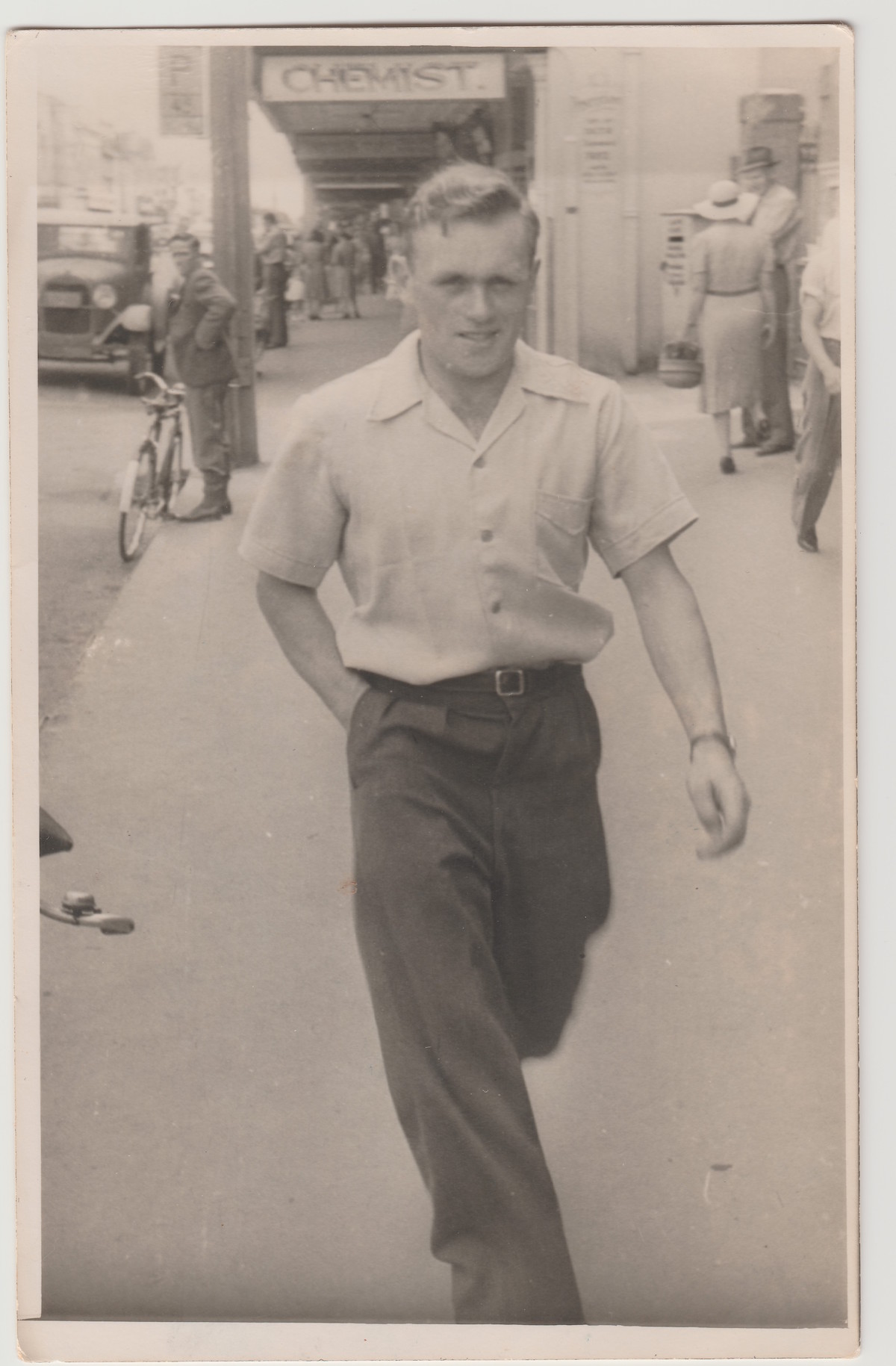 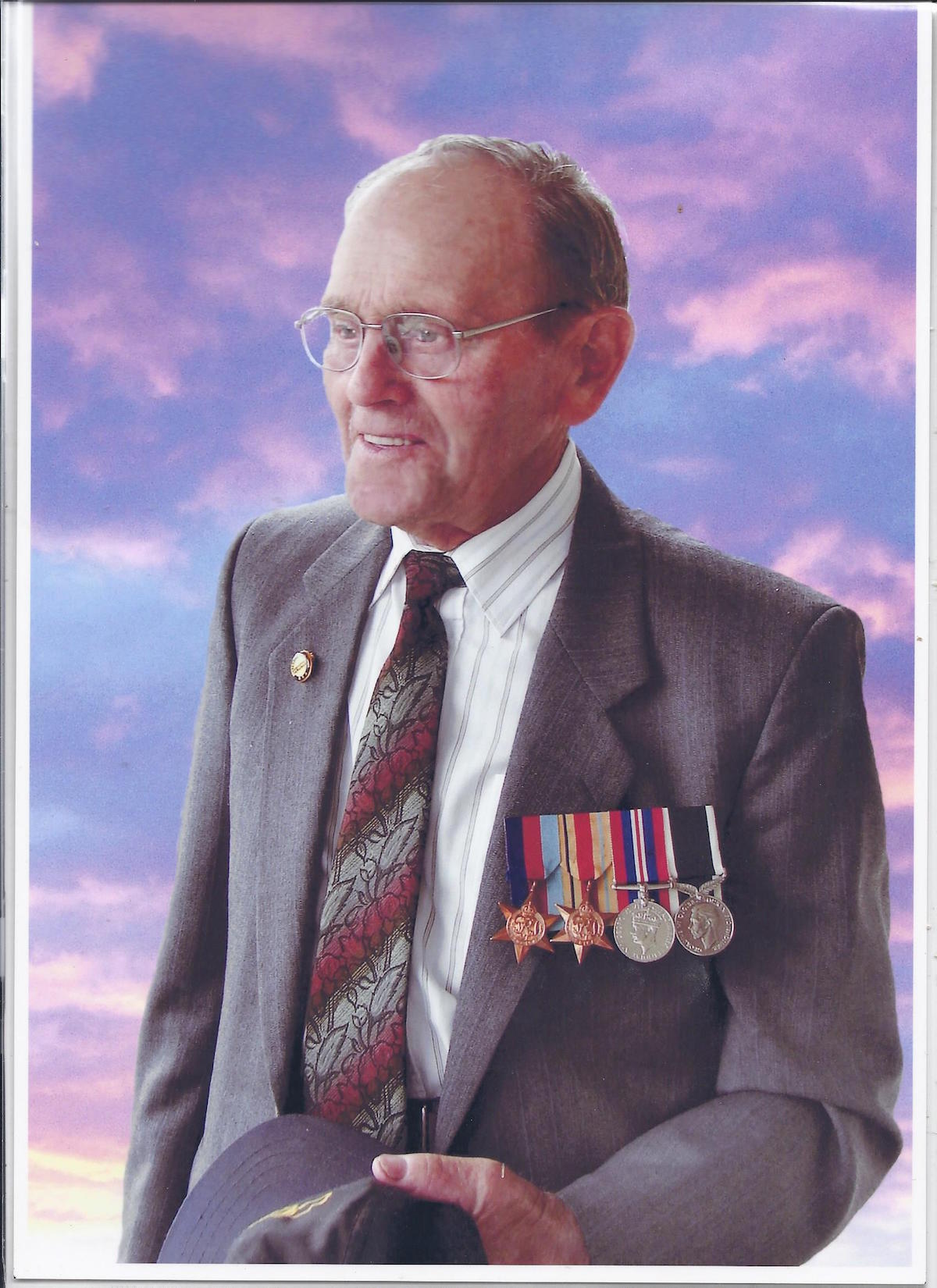 I didn’t apply for my medals until I was a lot older and I finally received them in my eighties
6. Prisoner of War
8. Home