I returned to Featherston where my parents had bought a house for a thousand pounds in Fitzherbert Street and only just moved into it. A couple of days after I got home from the war we were all gathered in the kitchen in my parents’ new home. There were a lot more people there than before and because there weren’t enough chairs to go around, I just sat on the floor. My mother was horrified and said, “You can’t sit on the floor.”
“Well half the time I didn’t have a floor and I had to stand up!” I replied. To have a wooden floor to sit on instead of concrete was pretty good really, I thought. They didn’t know what the other world was doing, they had no idea. For me it was fantastic to be able to walk around and not be under cover. I could go wherever I wanted and do what I liked. I used to wonder whether that old world on the farm where we played as kids was still running; I just longed to go back there and wander around. I tried it one day soon after I got back and I went down to the farm. Tim came out to meet me and the first thing he said was, “What do you want?”
“I’ve come to look around to see the place,” I said. I didn’t want anything; I just wanted to wander around. 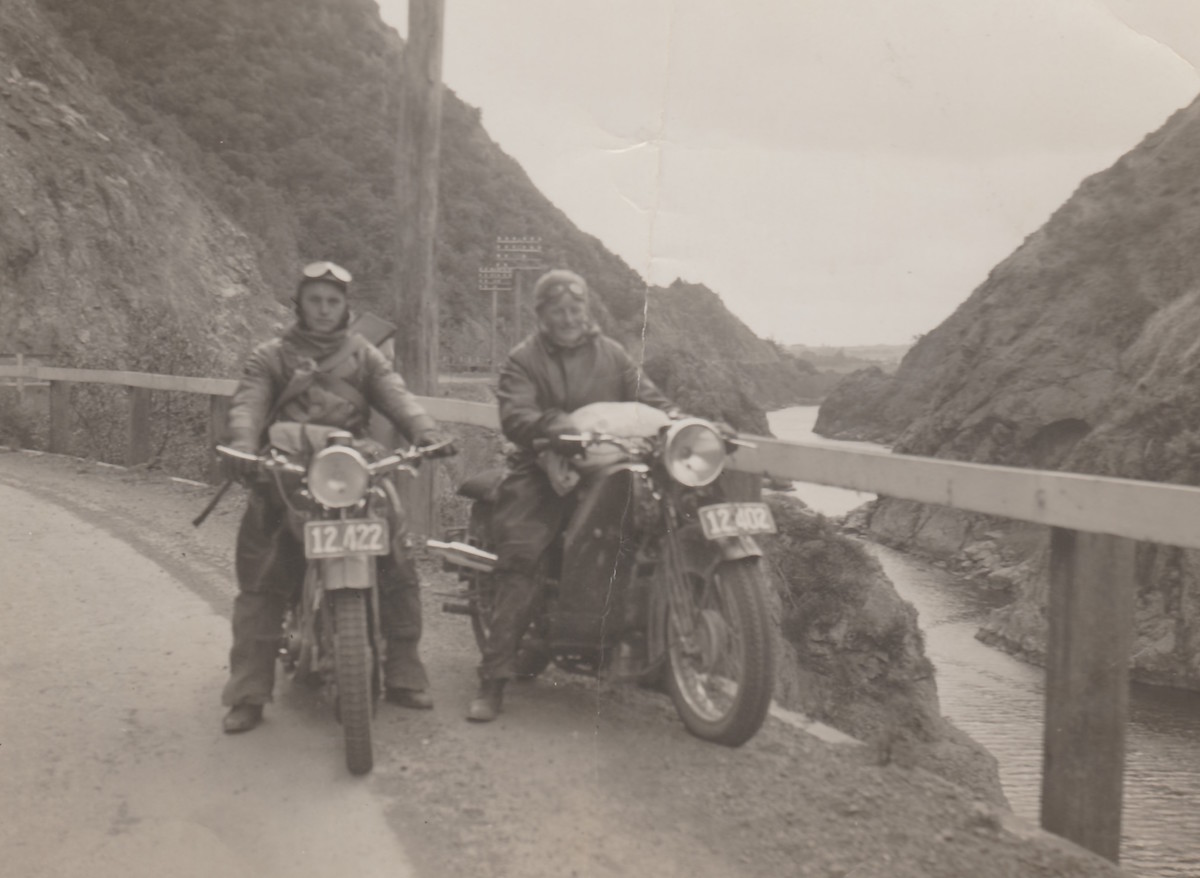 Tim (right) and I on our bikes on the Manawatu Gorge, circa 1945
Soon after I returned home I wanted to have a place to call my own so I moved into a Bee Keeper’s house down by Pukio Hall in Kahutara. My dad kept hives and he taught me how to look after bees when I was younger. I still had a few beehives which I left behind when I went overseas and they were quite suitable for what I wanted. While I was busy deciding what I’d put where, a chap in Masterton, Mr Lenz, who had over a thousand hives, suffered a stroke and needed help so I went there and started working for him. He had twenty dairy places where he already had bees, (about sixty hives in each place), stretching all the way up to Pahiatua right down to Greytown. My brother took over the bees in Greytown. In those days, it was pretty good; a gentleman’s agreement meant you didn’t come in on top of someone else’s bees. I had all the tanks to put honey in, and the machinery to operate and I had a truck, which was hard to get back then.

Returning war veterans were placed on dairy farms and into all sort of schemes. But for me this was an ideal set up and before I knew where I was, I was up to my eyes in work with the bees. I was living with my sister, Cis, in Masterton at the time. You couldn’t get timber or iron to put on a roof if you wanted to build a house. 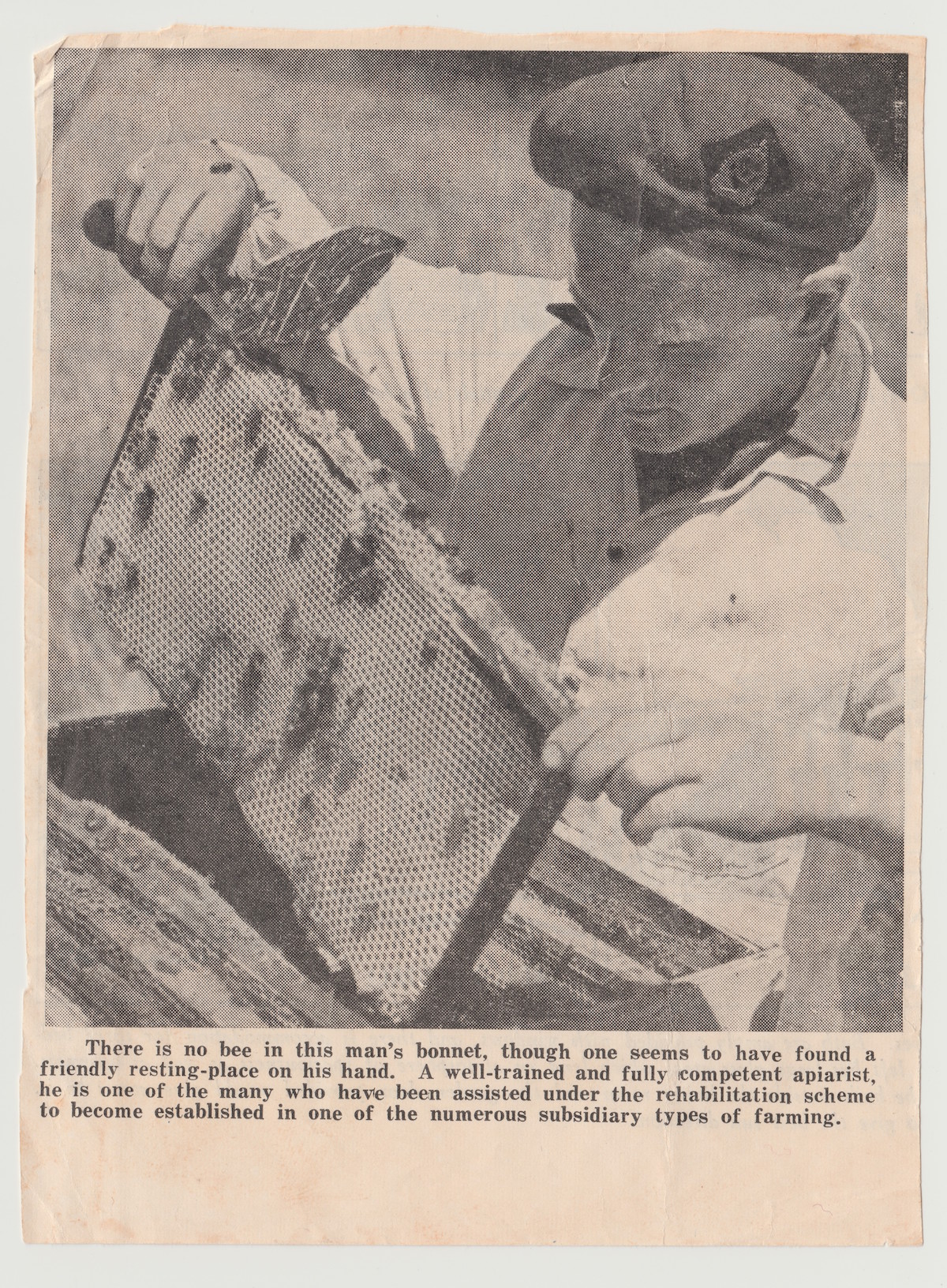 Me with my bees, Wairarapa Times Age article, circa 1945

Dorothy and me in Masterton during our courtship, circa 1945 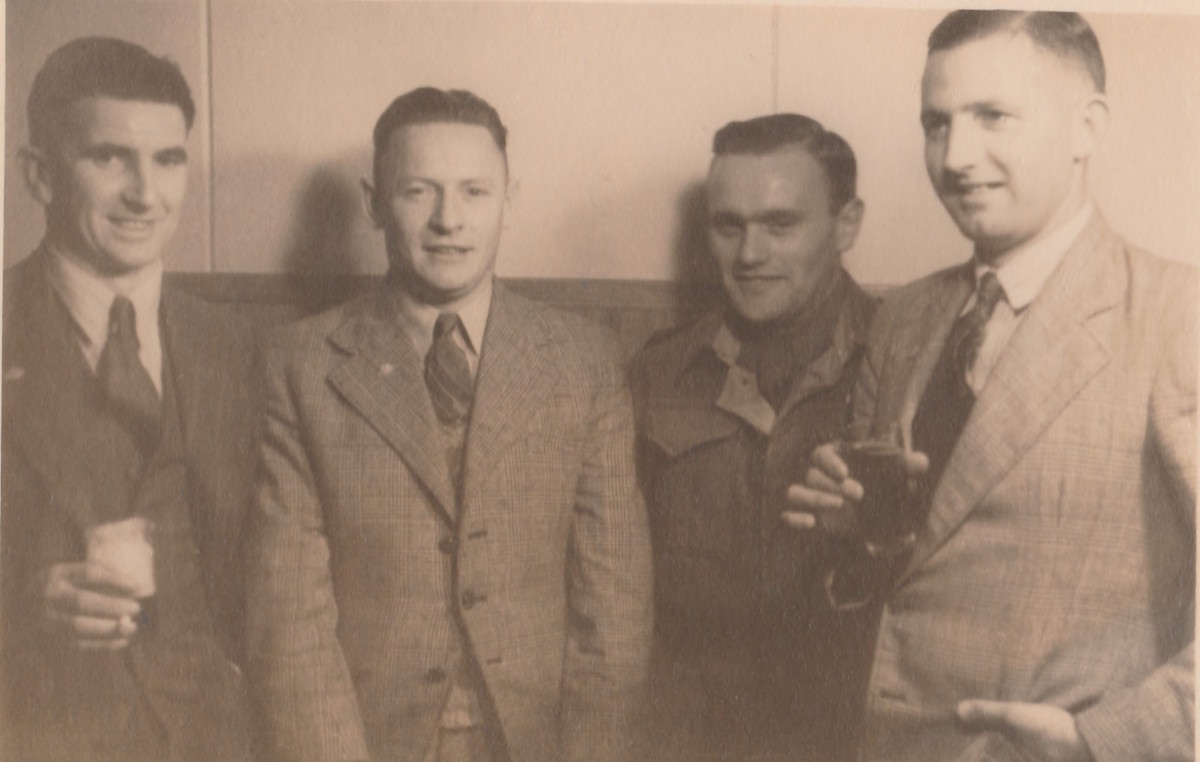 From left to right Doug Burt, Batman to Captain Rose; Dave Carnege, me and Len Connolly at the Reunion of the NZEF 6th FD Regiment, 18 May 1945

It took three and a half days to go right around the circuit just to count the hives, it took that long. One time during the winter I went to a farm on South Road not far from Eketahuna to feed the bees; there I met my future wife, Dorothy Nagel. At this farm the apiary wasn’t far from the cowshed and that’s how I met her. She was with her mother milking cows when I first saw her. She had lost her father years before and her mother was a very friendly person. To save me having to go back to Pahiatua to my usual hotel accommodation I was invited to stay at the house. It went on from there; I was looking for a wife and she seemed to have everything I was looking for. Dorothy was born on a farm and I thought she was very nice.

At any rate the weather wasn’t very kind those years, and it definitely controlled the business. We had snow white honey in Eketahuna where the weather was atrocious. In the south Wairarapa, it was golden Manuka honey that we made. In those days, everyone liked white honey and it was easy to sell but not Manuka, because it was brown honey and had a terrible flavour – it still hasn’t changed. 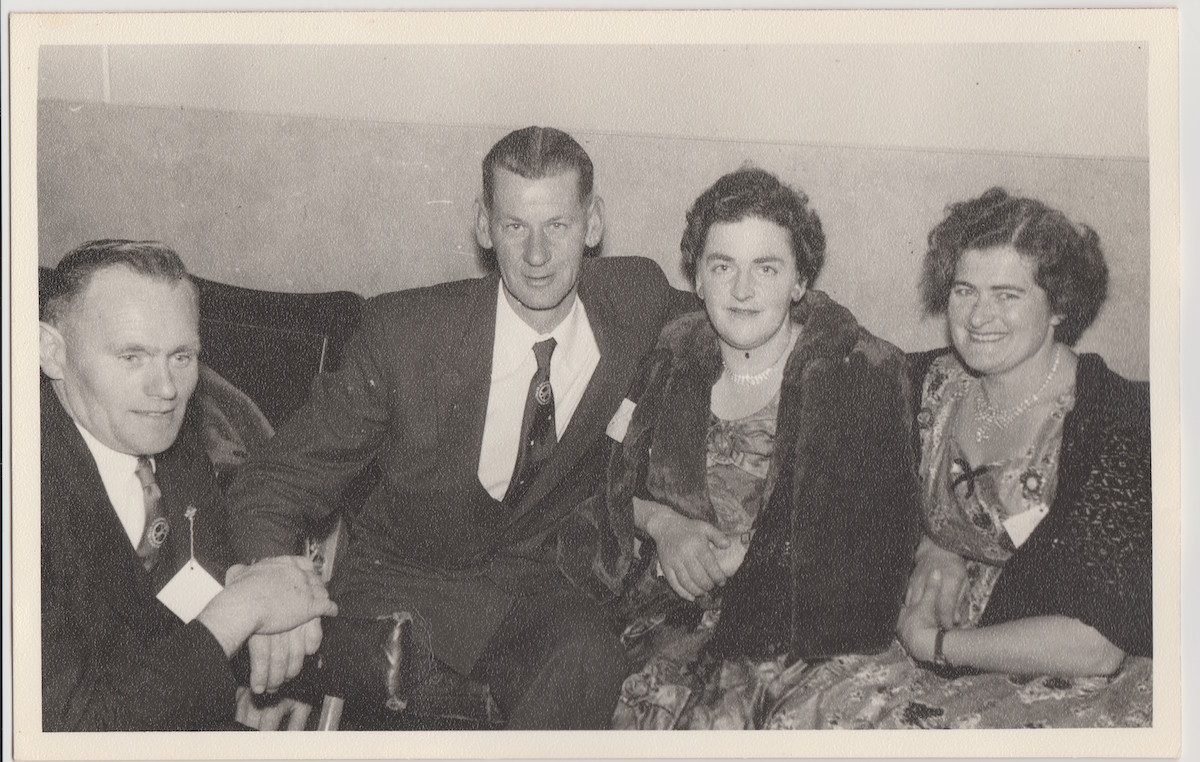 Prisoner of War get together. From left to right; me, Onslow and Dorothy Daysh and Dorrie. Onslow and I grew up together

Before we were married we went for picnics and fished for trout in the rivers around Pahiatua. All the rivers in the area were in good supply of trout. Dorothy was nearly twenty-five years old and I was already that age and it wasn’t long before we were married. Approximately one hundred and twenty people attended our wedding held at the Anglican church in Eketahuna on 25 May 1946 and I remember leaving in my Model A truck.

Once married, we stayed with Aunty Sis who was terribly co-operative and that’s where Elaine was born. In fact, Aunty Cis gave birth to a child, Judith about the same time. By the time we left her small two-bedroomed house, there were about eight people living in it. 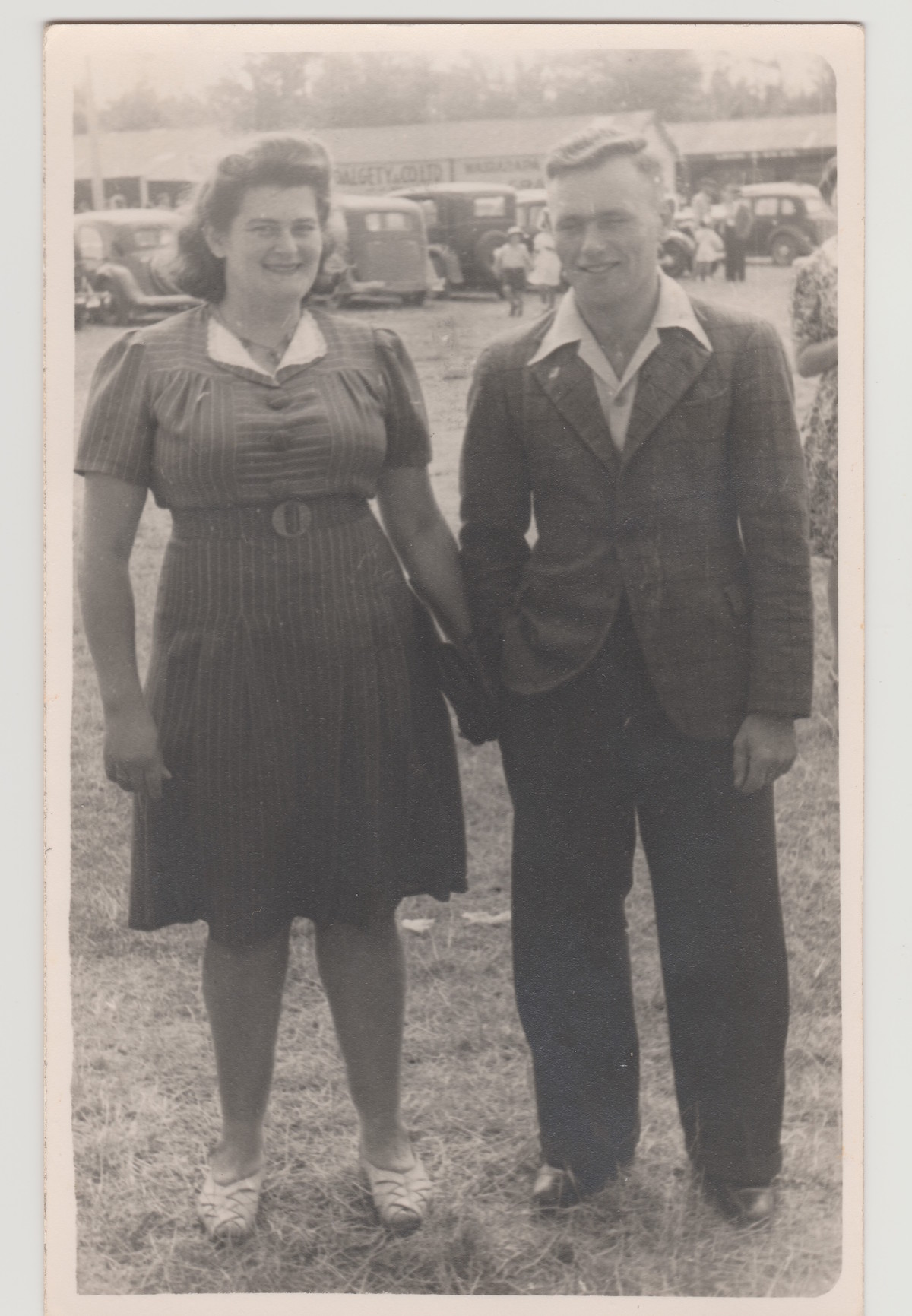 Dorothy at six months pregnant with Elaine, and me at the Carterton Show, circa 1946 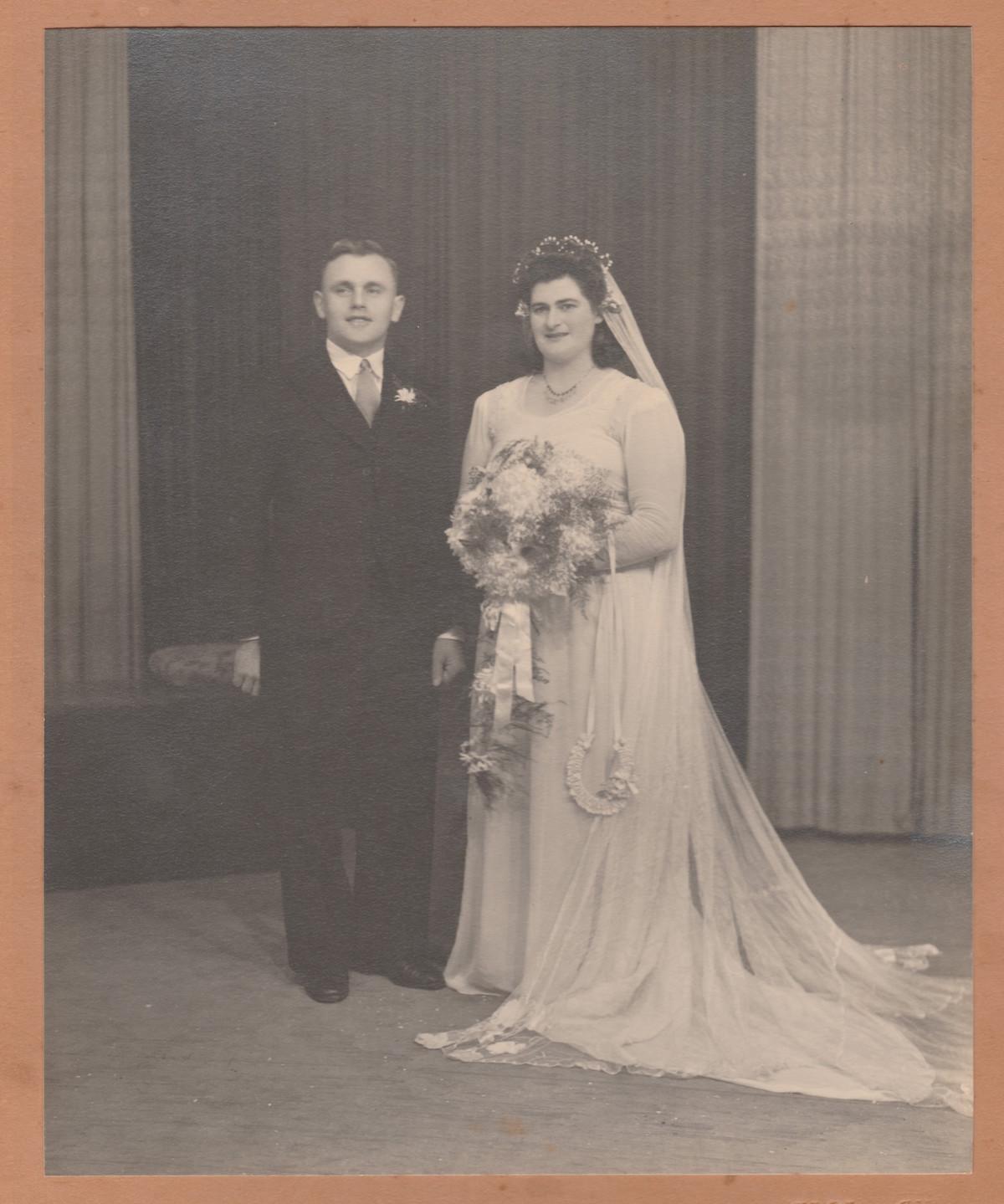 Dorrie and me on our Wedding Day

I applied for a permit for returned servicemen to get a place and the officials came to check that the story I was giving was right. They even checked with the neighbours next door. I got the permit to build our home in Masterton and I made a Spanish style house against all the advice from the government people who said that when I went to resell it wouldn’t be very popular. I didn’t listen to them – I wanted what I wanted.

Cyril McCardle who was a bomber pilot in the war, helped me build the house. A bomber pilot had to make fifty trips over Germany before they took you off the run because there was no future for them after that. They were losing them, about fifteen bomber pilots a day. Poor old Cyril, he did fifty operations and then volunteered for another fifty and with the law of averages of course, he couldn’t keep going. One day they were roaring over Germany bombing and Jerry was firing back at him with guns, it was terrible how many guns they had firing. A shell came right into Cyril’s cabin and exploded into his face. All he could he do was instruct his co-pilot what to do. The co-pilot didn’t really know how to fly but at least he was with someone to help get the plane back to England safely. When Cyril returned to base he was in a terrible mess with shrapnel all over him.

Cyril was a hell of a nice chap and when he got back from the war he helped me with all the joinery for the windows. I’d picked out enough totara for him to make all the windows. Rob Skipage, a cousin, was carpentering in Featherston and he had a variety of quick ways to do everything. I had my plan; Cyril drew it up for me and I had all the cement sheets of different sizes to make. I set to work making cement board sheeting to cover the outside. I’d have one size for under windows and a full-size cement board for a wall. I put the paper on the concrete floor, laid the steel down for a frame and used rejected flax from the local flax mill. I’d mix up buckets of pure cement and tip it onto the paper. The bits of steel stopped it running any further and I’d tease up the flax and pat it down with my hands. I’d make one sheet each day and leave them there for about four days to dry. Eventually I had a great stack of cement board sheeting to go around the house. I put all the piles in and laid the flooring joists down and got the big timbers in – eventually we completed the house. 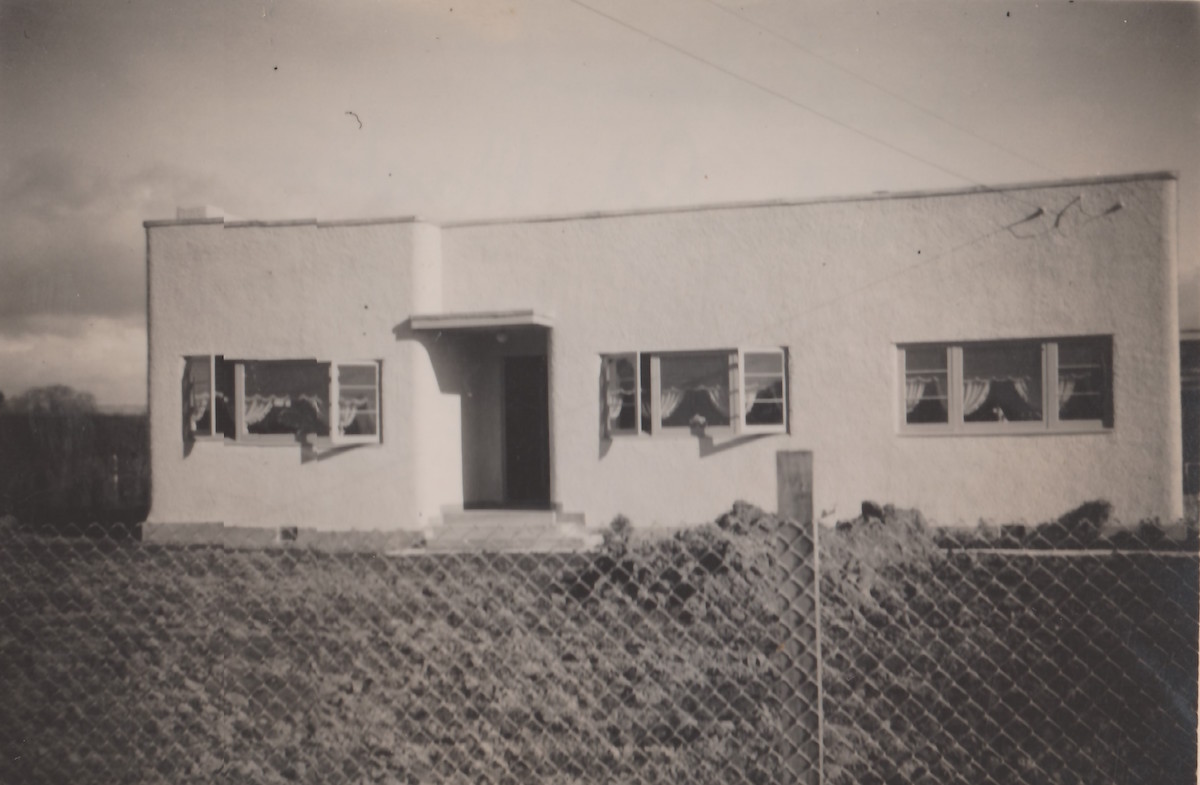 I went working in a tile factory with a partner who was prisoner of war with me in Germany, Edward (Ted) Henary. He was a perfectionist and wanted everything spot on which was very good for my business. It was hard work but it brought in money. We made three or four kinds of tiles out of sand and cement using a very small machine. We mixed the sand and cement and put the covers on the machine that was in the shape of the tile. We worked up a bit of moisture and pulled the shaker around to shake the powder on the wet cement. We’d work up a bit more moisture and work it through and put colour on the tiles. It was a very efficient system but they wanted six hundred tiles a day. Because we had high standards and wanted to have a consistent level of quality, we were only able to produce a maximum of four hundred a day.
7. My Escape
9. Kahutara