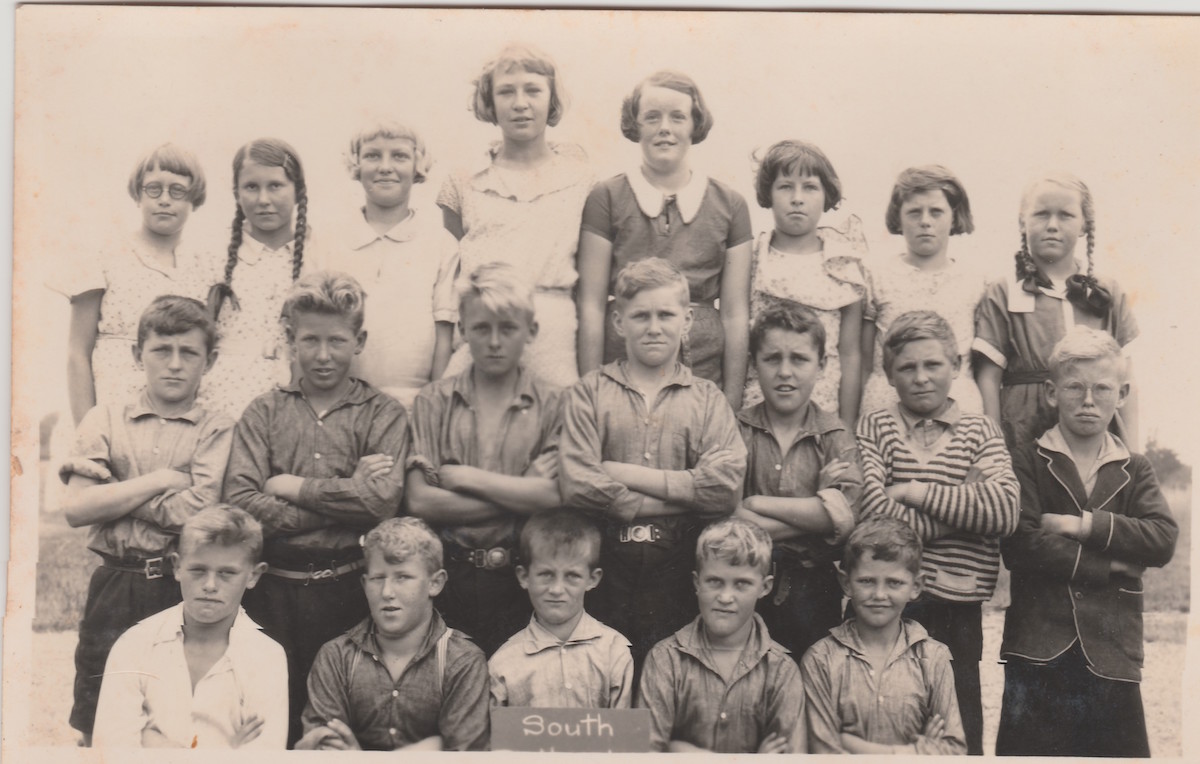 School photo; I’m on the left seated in the front row
I walked about three miles (nearly five kilometres) to South Featherston School when I was five years old, which was a long way to go for my short legs. Mum would’ve run the car in every day for us but we couldn’t afford that. If I was ready on time, I hopped on my brother Pop’s milk truck and caught a lift. He dropped me off on his way to the Featherston Milk Factory. Pop had left school by this stage and learned to drive the milk truck. Coming home there was no milk truck and if I wasn’t quick enough I walked home in the dark. If I was lucky I caught a ride home with the guy who lived next door, who we nick-named ‘Billy the Geezer’. Sometimes I jumped on the back of his wagon despite him leaning over and trying to swat me away with this whip like unwanted flies. I don’t think he tried very hard because he wasn’t very successful. Later, in the 1930s our family bought a pony and gig that I drove; it was handed down to the next-in-line once the eldest child left school.
There were about eight to ten other children in my class and Mr Grant was our teacher. I took a Proficiency Exam once and missed out on passing through misspelling. Mr Grant threw the paper at me with twenty words on it which was the actual exam paper for the next day’s test. I took the paper home and learned the answers off by heart but I still got nineteen out of twenty wrong and failed the test badly. Meanwhile, I scored a hundred out of a hundred in mental arithmetic; I liked sums and figures but was hopeless at spelling. I enjoyed history and geography too but the English exam just wasn’t so easy. Mr Grant left and was replaced by Mr Burk who primed himself with whiskey before taking students into his office and flogging the hell out of them.

Dad used a branch about six-foot (approximately two metres) long off the poplar tree from beside the house to discipline us. When all the leaves dropped off that branch he let us go. When I saw him going for that tree, I ran upstairs and jumped out the window onto the kitchen roof, then slid down the water pipe while Pop egged me on.

Uncle Will and the bridge

When I was about five and Tim was about six or seven we hid a mile or so away from our home under a bridge with gaps between the planks. There were a lot of bumble bee nests along under the bank and we enjoyed spending time annoying them. None of the horses liked that bridge. They baulked coming down the road and shied from the water running fast underneath it. Water poured out of a big hollow originating from the Hodder’s neighbouring farm.

An idea came to Tim and me one day; to hide under the bridge, jump out and say good morning to Uncle Will (Dad’s brother) when he approached on his horse. “We’ll drop down under the bridge, look’s he’s coming now,” Tim said. Uncle Will’s horse Baldy also never liked the bridge, in fact he hated it. At the appropriate moment, Tim and I jumped out from under the bridge and yelled, “Good Morning Uncle!” from the top of our lungs. Bloody old Baldy reared right up on his hind legs and spun around. Poor Uncle Will, I could see him go. He landed on the gravel road and slewed down it on his back. I turned to Tim and said, “I think we should get out of here – if he’s anything like his brother we’ll be in for a bloody hiding.” We got out from under the bridge and were on our feet just in time to see Baldy galloping off, leaving poor Uncle Will high and dry without his ride about a mile from home. 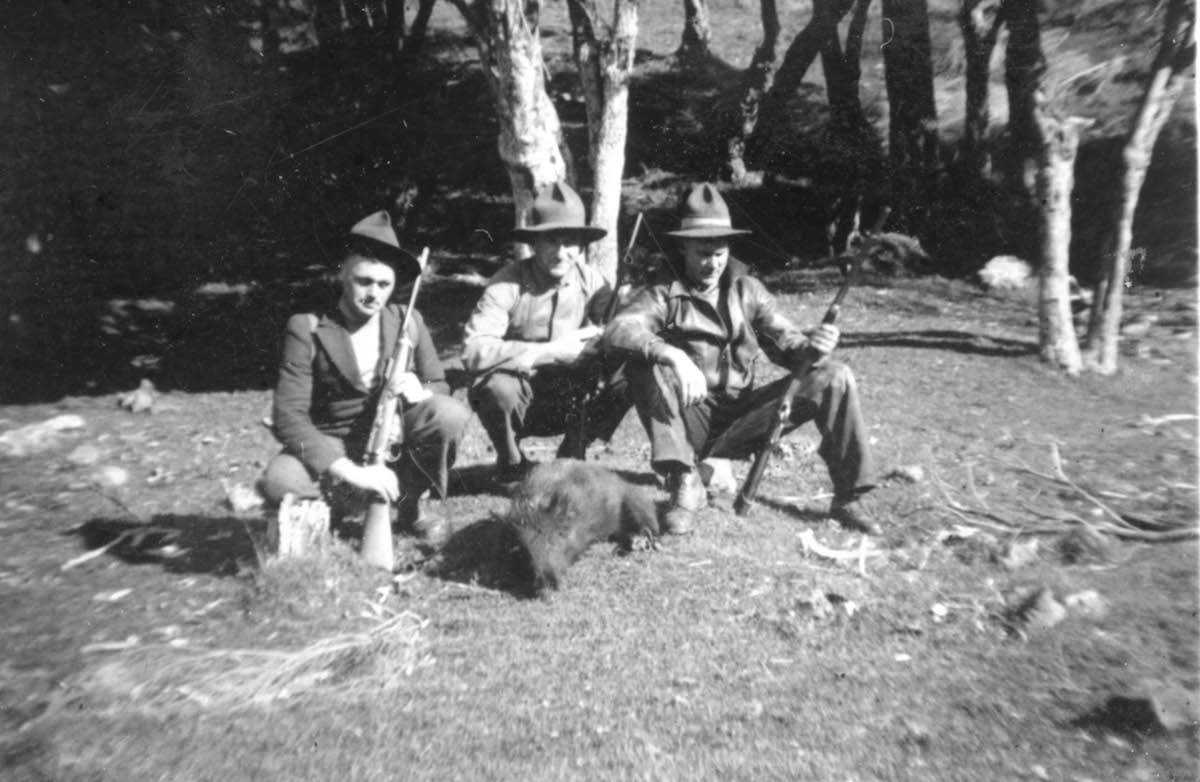 Hunting as a teenager with Ted Tyer and Trevor Reed just before we left for war. I’m on the left.
Although Grandad drained Spring Farm, we still needed to remove a large amount of tree stumps otherwise we couldn’t work the horses and plough. Previously the farm had been milled for its native timber. When we took one big tree out, water wouldn’t stop spouting from the hole and in order to drain it, we had to dig several drains back to the main drain.

We bought fifty plugs of gelignite at a time to blow stumps out to clear our farm. Once a stump is out of the ground it leaves a thin crust and water can easily flow up out of the ground from springs. Dad’s detonator often didn’t work because he crimped the fuse into the detonator with his teeth. He never owned a crimping gun like I did to crimp the detonator. This was important as it had to stay dry to detonate.

I first used gelignite when I was a boy and there’s no doubt Dad used to be a holy terror. The dangerous thing that could happen was if you let the fuse screw around in the detonator, causing it to ignite. Dad used to say, “Oh. We’ll blow it, put a plug or two under it.” He put ten gelignite plugs under some of the tree stumps – colossal great big rimu stumps about a metre across. Once blown out they were only good for firewood.

A dog turned up at home, which we named Toss. We didn’t know where he came from so we took him down to the paddock to see what he could do. He was a good heeling dog and could snatch a cow by its tail and hang on. Toss was also a good rabbiting dog. He was good at everything and just got old in the finish and I had to shoot him to stop his suffering. We had another dog when our children were young and Elaine was probably eight or so. The dog attacked a boy from over the road after being provoked and I had to shoot that one too.

Spring Farm was a mass of big drains and we spent time as children fishing in them. I caught lovely trout and perch using spears – a highly illegal activity at the time. There wasn’t any perch when Grandad first bought Spring Farm so he went over the Rimutakas to a lagoon in Levin where he collected a few in a bucket and carried them all the way back over the hill and let them loose in our lagoons. I never saw anything of them when I was leaving school but when I returned a few years later perch were everywhere. Those little perch had grown up and made quite good eating. When my two sisters, Sis and Bid went fishing once, they caught over a hundred of them.

Often, I’d go with Dad and my brothers to fish for flounder in the lake. We used a mantel light; a big white-spirits lantern that had a little cover over the top. It produced a very white light and it was good for floundering as we could see all around. If there was no wind and the lake was calm, the mud settled and we moved carefully around in our thigh boots with the mantel light. We also rowed to near the mouth of the river where fresh-water-flounder were known to hang around and set our nets. My school friend, who lived not far from us, Onslow Daysh, regularly joined us floundering. 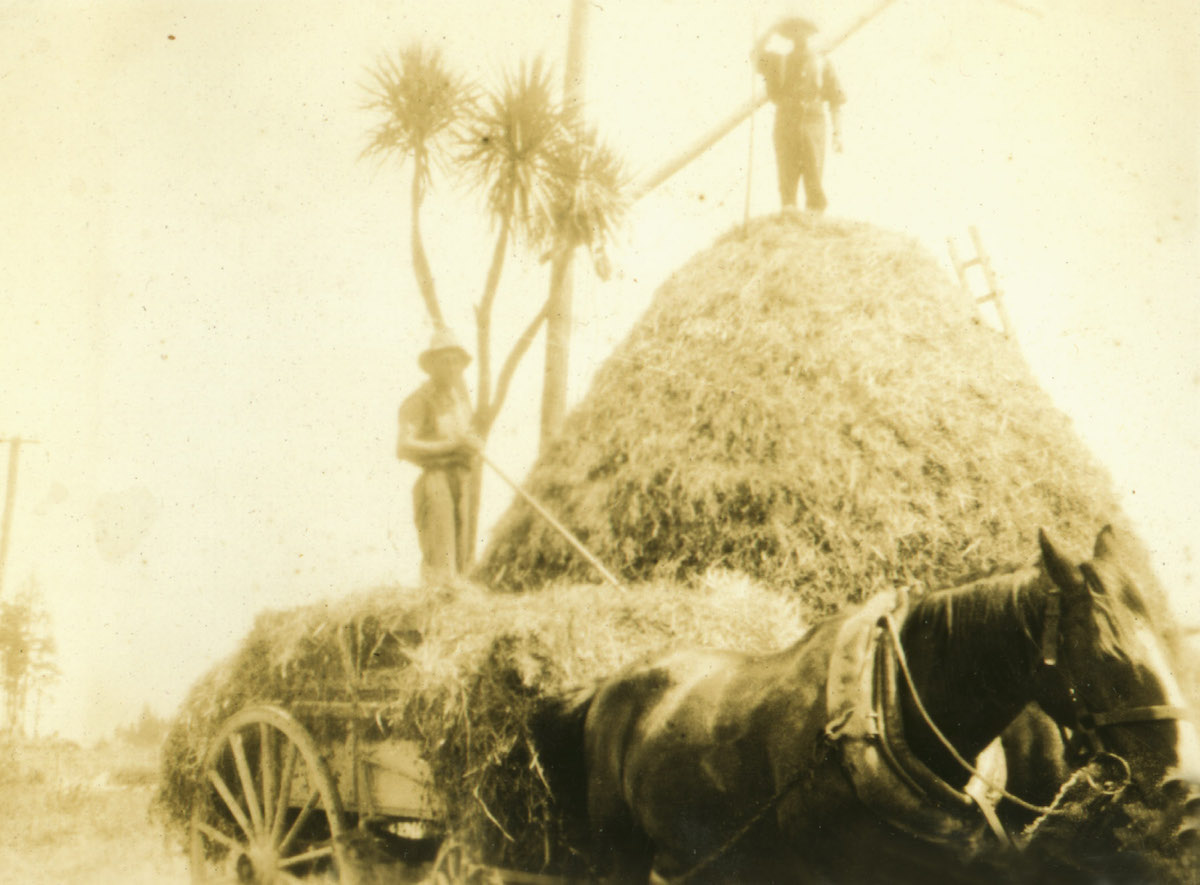 A stack of oats we helped load at Clark’s farm 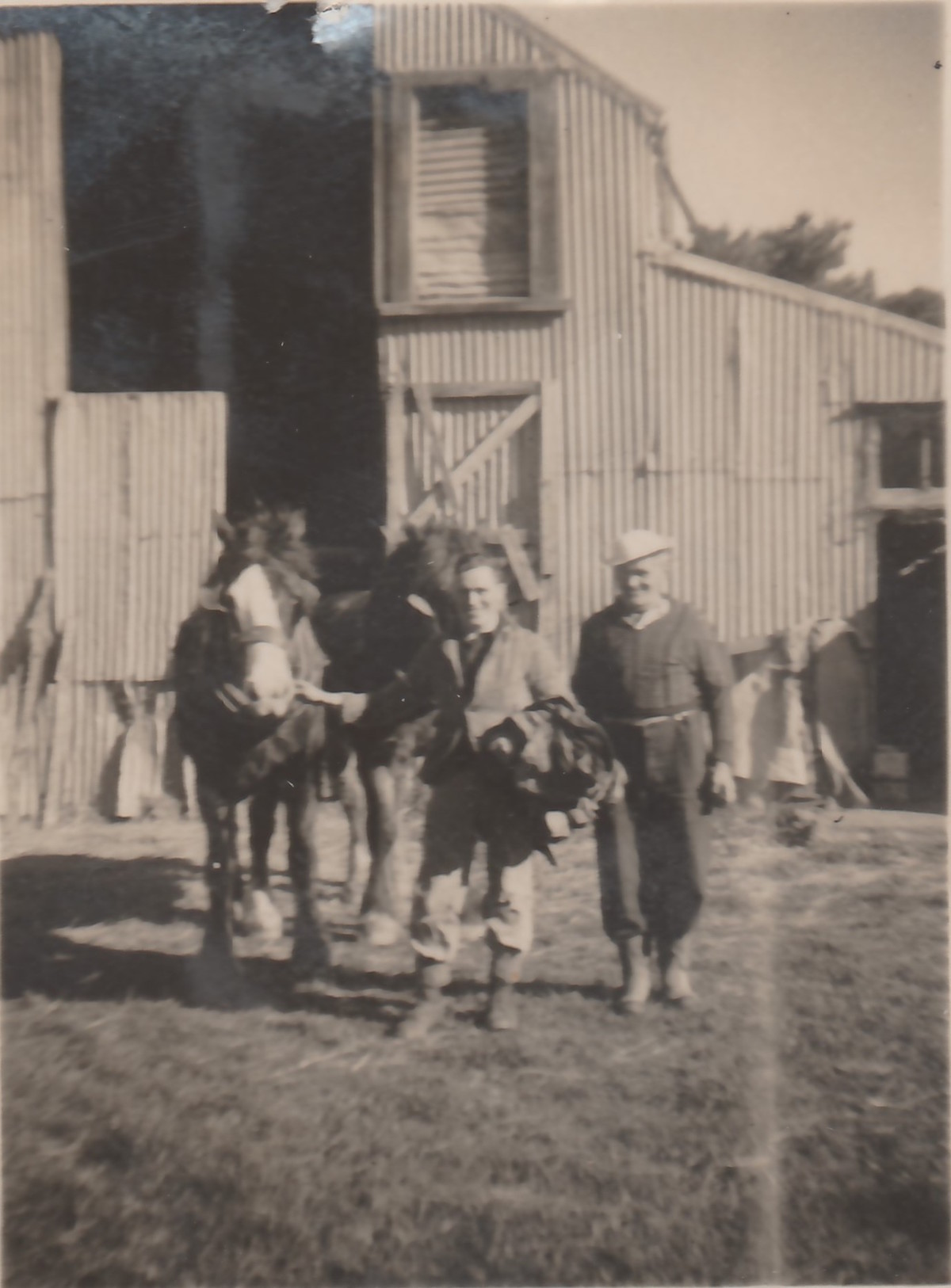 Pop and possibly a skipage outside the hay shed 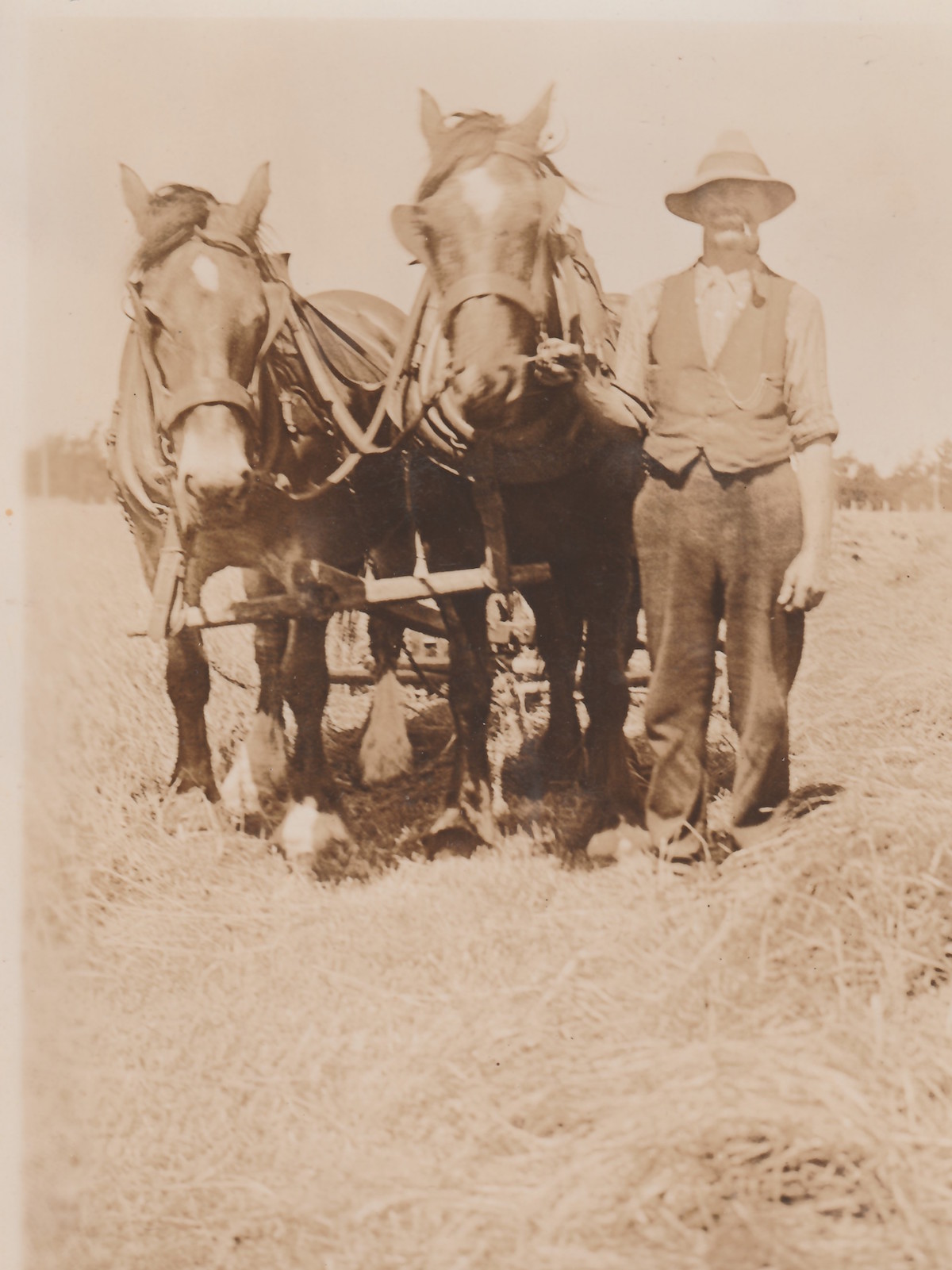 Uncle Will going to mow hay

The old hay shed made from totara logs was higher than the old hay wagon that had great big high sides on it; as high as a person could fork hay up into it. To brace the hay shed up against the wind Grandad rowed his boat out onto the lake and retrieved huge totara logs that were so massive you couldn’t get your arms around them. He hooked at least six of these logs together to build the hay shed. Uncle Charlie (Mum’s brother) was a good carpenter and helped get the posts in and square them all up taking care of the first twenty feet (approximately six metres). Once the walls were up big timbers were put in, some quite thick, to make the roof. After a while loading gear for the hay was also installed. For many years they had used a fork by hand but this machine had a cable in the roof with a great big spear that clamped the hay when pushed into the wagon load.

Once a full load of hay was forked onto the wagon, Dad and I jumped on the back and tramped on it to make it into an even more solid heap. Then we used the spear to pick it up and ram it down, solidifying it further. We used clips to clamp the hay before putting it on the back of truck. Two big prongs stuck out of the truck that helped keep the hay on the back. A pulley system was in place to multiply the horse power and the cable was so heavy I could barely lift it. There was about fifteen feet (approximately four and a half metres) of cable, about half an inch thick that swung out. The large fork grabbed a bunch of hay from the trailer and our horse Baldy, pulled the cable up as he walked away from the shed. Uncle Charlie who stayed in the shed with a pitch fork, pushed the hay to get it swaying and when it was near the wall of the shed, he grabbed the cable, which released the hay, and dropped it. He had great control over where he put the hay; Uncle Charlie had been doing it for years.

All the loose hay was on the top at the back of the wagon. It was too loose to pick up with the spear so we used a canvas sling that covered the whole floor of the wagon. The ends of the sling were pulled over the top rails of the wagon. When we got near the tail-end we pulled one side of the sling over, hooked it up and gave it a yank. My cousin, Arthur (Uncle Will’s son) would go up two or three feet (approximately a metre) and let it slack again. We’d grab one side, then the other, and have both sides of the sling covering the whole wagon in no time. Then we got out of the way in a hurry otherwise we’d risk going up with the sling. Uncle Will’s horse Baldy, pulled the wagon and if we overloaded him he’d rear up in the air and come thundering down. One day, he came down on Arthur’s foot. Baldy wouldn’t get off him despite pulling on the rope. Finally, he whipped his foot out from his shoe before too much damage was done

The hay shed was pulled down in the 1970s and some of the material was used for the cow shed roof. The cow shed’s floor was brick.