My grandfather, Aaron Simmonds, was born at Rougham, Suffolk, England on 27 April 1855 and he married Rosa Maria Wade. My grandmother Rosa was born on 28 December 1856 in Poplar Parish district, Middlesex, London, England on 26 July 1875. Soon after they married they came out to New Zealand on the Howrah arriving in Petone, Wellington in late 1875.

Every time he could, I remember Grandad hopping on a boat to return to the UK. In those days, it took six weeks to sail out there and six weeks on the passage back. When in England he stayed with his older brother, Rezin, who lived in London.

Grandad bought his mile-long (approximately one and a half kilometres) farm block from Chas Pharazyn who owned all the land from Longwood Road to the edge of Lake Wairarapa. He worked on local farms and probably for Pharazyn as well, and this might have led to the purchase of an area called Lakeside Farm, which wasn’t far from Tauherenikau River and Lake Wairarapa. Grandad renamed the swampy and flood-prone land, Spring Farm.

Spring Farm went back to the Simmonds lagoon on the edge of Lake Wairarapa. To run his stock and graze his cattle, Grandad needed to drain the swampy land and he dug these drains by hand.

Grandad built a homestead on Spring Farm on the far side of a swamp down Simmonds Road, Lake Reserve near Featherston. To reach the other side of the swamp he used planks to create a walkway. He laid several planks down one in front of the other and picked up the ones behind to use in front. Later Grandad added a great big dining room and a second storey to that homestead. It had a wood stove at one end and an open stove at the other that kept the place warm. The beams in the roof were made of totara, each over a foot (approximately thirty centimetres) wide.

When Grandad bought Spring Farm, neighbours the Donald’s, already owned a farm that ran along the back of Spring Farm between Tauherenikau and Simmonds Road that followed a dip down to the shores of Lake Wairarapa. At one stage, Grandad sold a strip of his farm to these neighbours. It was good country and didn’t flood and allowed the Donald’s more direct and easier access to Ashby’s Line. The width of the land Grandad sold was about a paddock wide and the Donald’s grabbed it with both hands. This block became known as Donald’s Farm and today it’s the main access way for milk tankers.

After Grandad retired my parents bought Spring Farm from him and our family grew up in the homestead he built. There were nine of us in total. It was a lovely two-storey homestead with lots of beautiful native timber in it. It was the place where I played rounders outside on the lawn with my siblings, and hide ‘n seek in the trees that we planted.

During the Second World War after he returned from service, my brother Tim worked on Spring Farm and later he purchased it. Many years later he pulled down the old homestead and a number of the trees we had planted. Even though the trees were high and the whole place overgrown, it should never have happened. 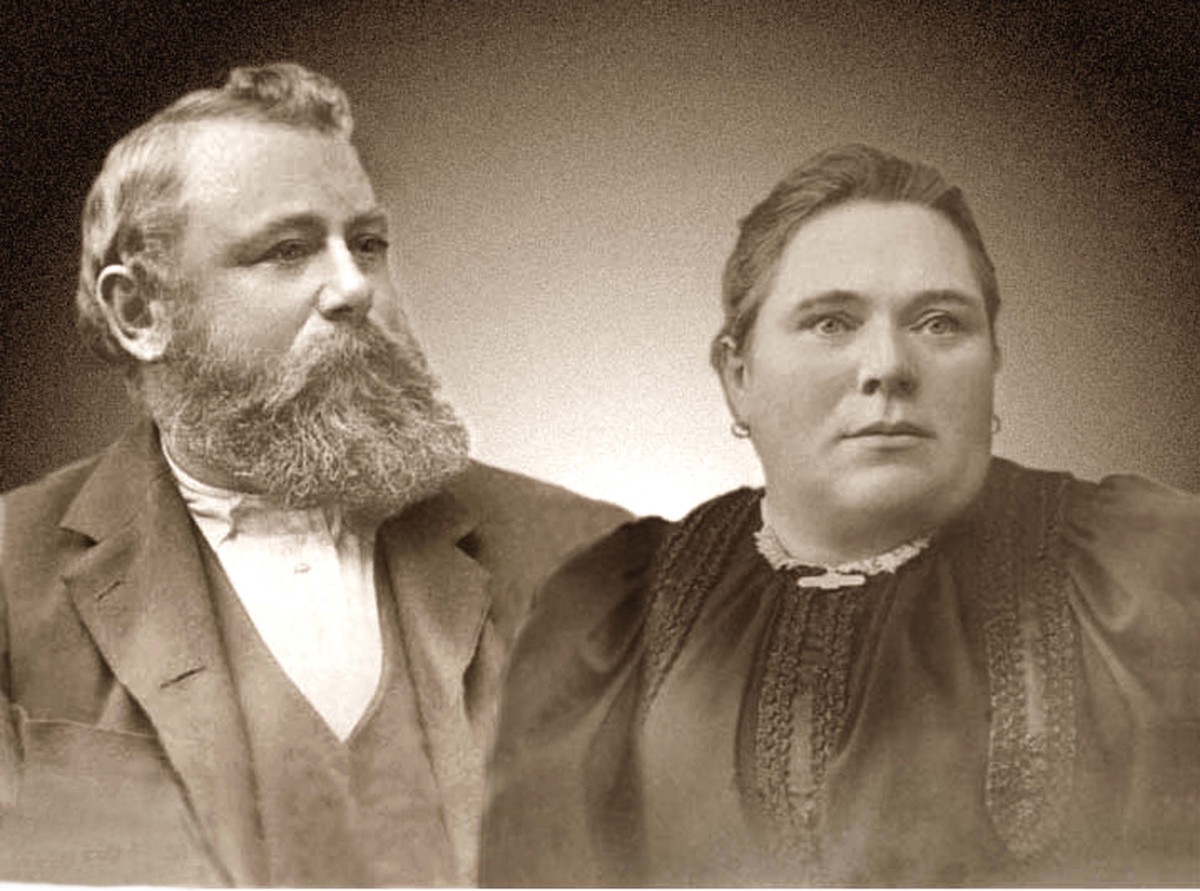 Aaron and Rosa Simmonds, circa 1892 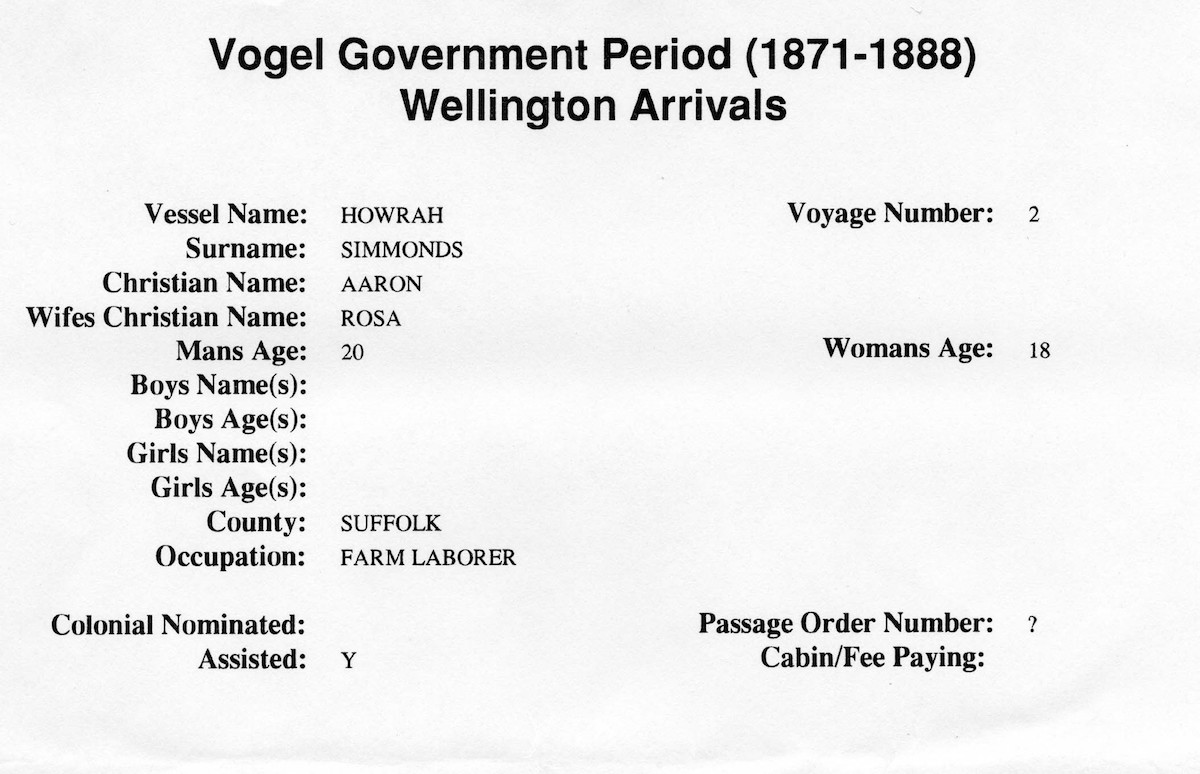 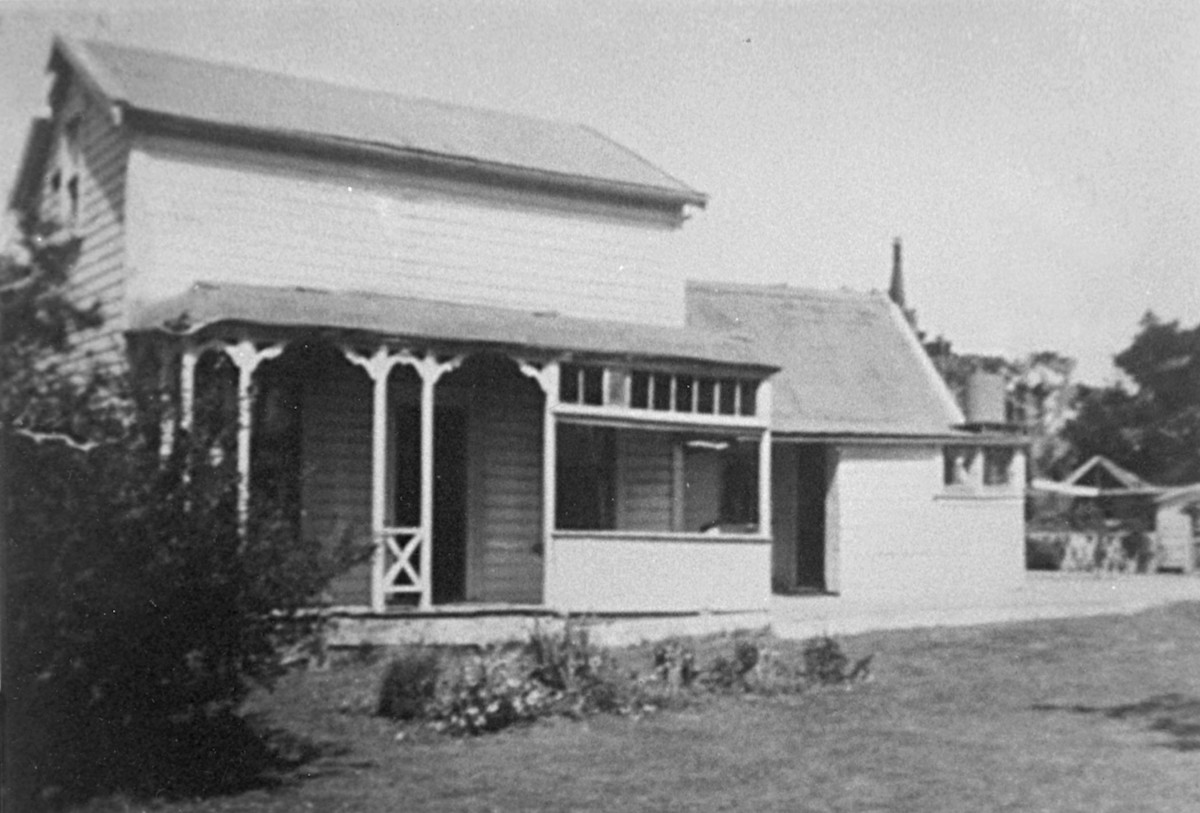 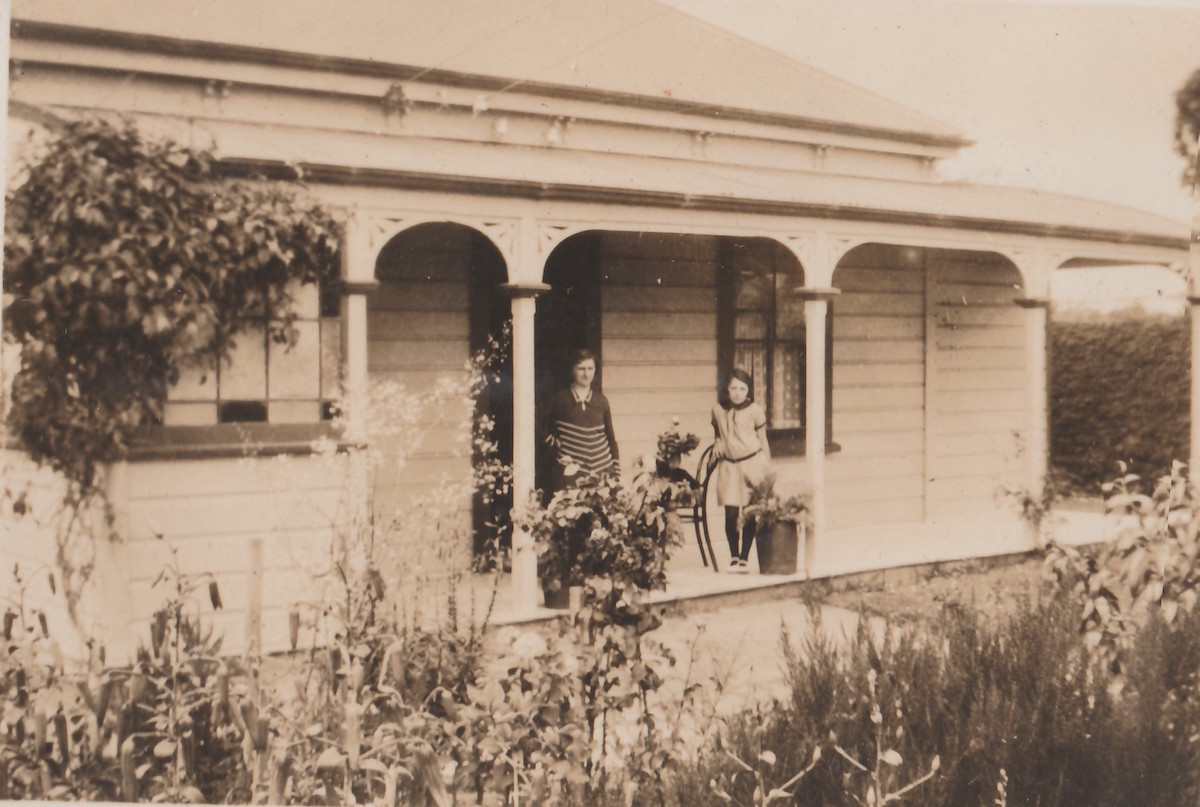 Two aunts on the verandah of Spring Farm Homestead

My Uncles and aunts – Simmonds side

My grandparents had seven children; three boys and four girls, all born in Featherston.

Grandad told us about the times he went fishing with a bit of protest from the local Maori. In his boat, he went down a channel about a kilometre long that came out into the lake where he tried his luck. Unhappy Maoris lined the banks of the channel and threatened him with their spears, along with suitably eerie cries and calls. Despite this, he carried on his way and if necessary he picked up his musket, already loaded and ready for action down on the deck, and threatened them with it. Grandad put up with this sort of behaviour going out onto the lake and on his return. He was pretty bombastic really.

He grazed the herd right out to the edge of the lagoon during hot dry summers. The cows ate the swamp grass called willow weed and soon after, they’d poo bright red! My father talked of when he was young taking people out down to the lake to spend the day with Grandad. If they were caught short they were told to use a particular type of grass, which just happened to be willow weed, to wipe their bottoms. Of course, this is the wrong thing to do and their backsides would burn all day long.

My grandfather also worked as a fencer on local farms. His son, Uncle Will was also a fencer and he erected the original fence from Martinborough Road, down Lake Ferry Road past Diversion Road, along to the corner where the Bentons lived. The bends past Diversion Road are there today because it was too swampy to put the road straight through, so Uncle Will put the road on the drier land.

Grandad also worked on building the Rimutaka Incline, near Cross Creek but I’m unsure of any further details. When Grandad retired, he surveyed off an acre of ground and built Spring Cottage where he lived. It was a very nice house with lots of heart timber and it’s still there today. He had most of the outside in garden and I helped him dig over his potatoes. He also divided Spring Farm between his three sons; William, Fred and Robert, and each paid for their share. 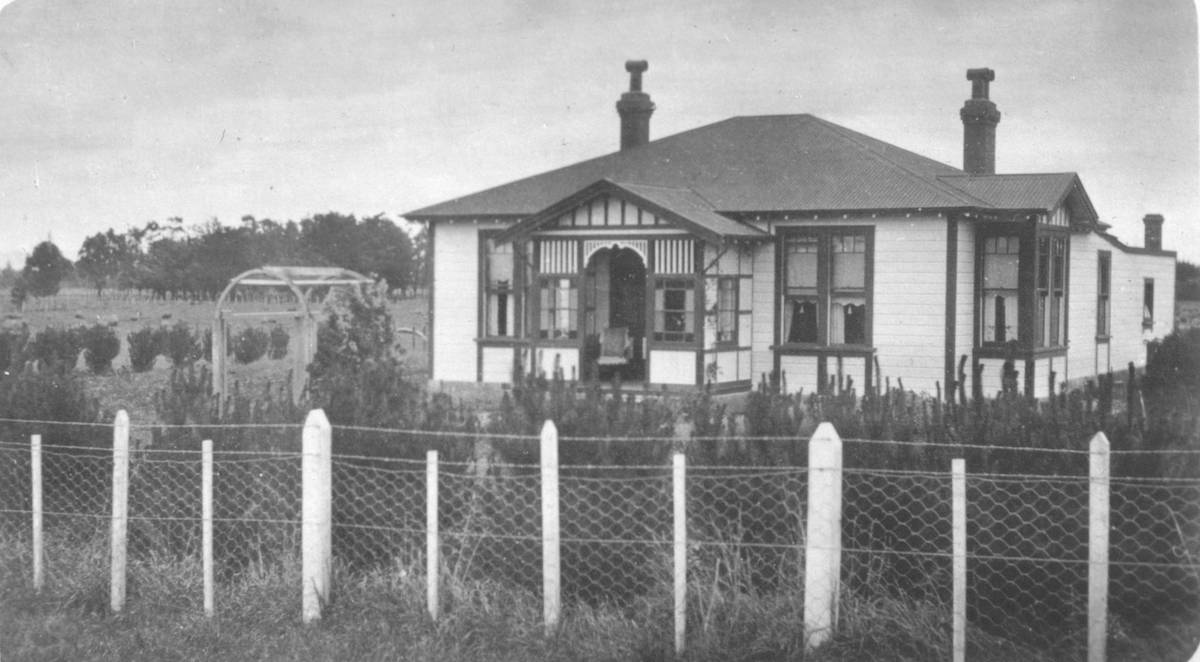 My mother’s father, a Pepperell, drowned during a family picnic at Lake Reserve. They had taken lots of alcohol with them and he drowned while swimming. The bay at the reserve where this awful accident occurred was named Pepperell’s Bay.

My grandmother, Rosa, died in 1910 and the Death Certificate reads, ‘Fatty Degeneration of the Heart and Bronchitis’. Grandad married again, to his nurse, who we called Aunty Elizabeth. He married Elizabeth Weston on 30 March 1912 at the residence of Mr C McKirdy, 47 Scarborough Terrace, Wellington, New Zealand. They lived in Spring Cottage for several years before Grandad passed away in 1927. 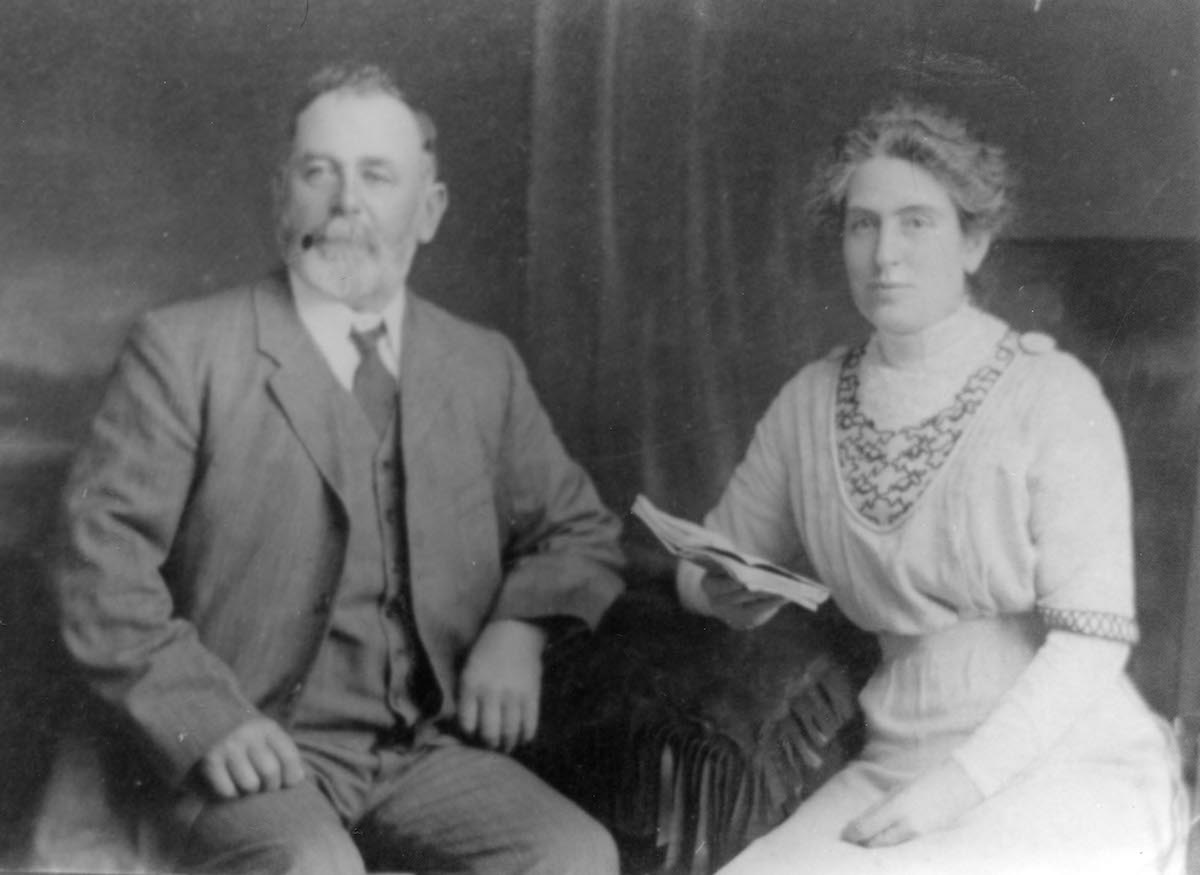 Aaron and his second wife, Elizabeth Simmonds, circa 1912 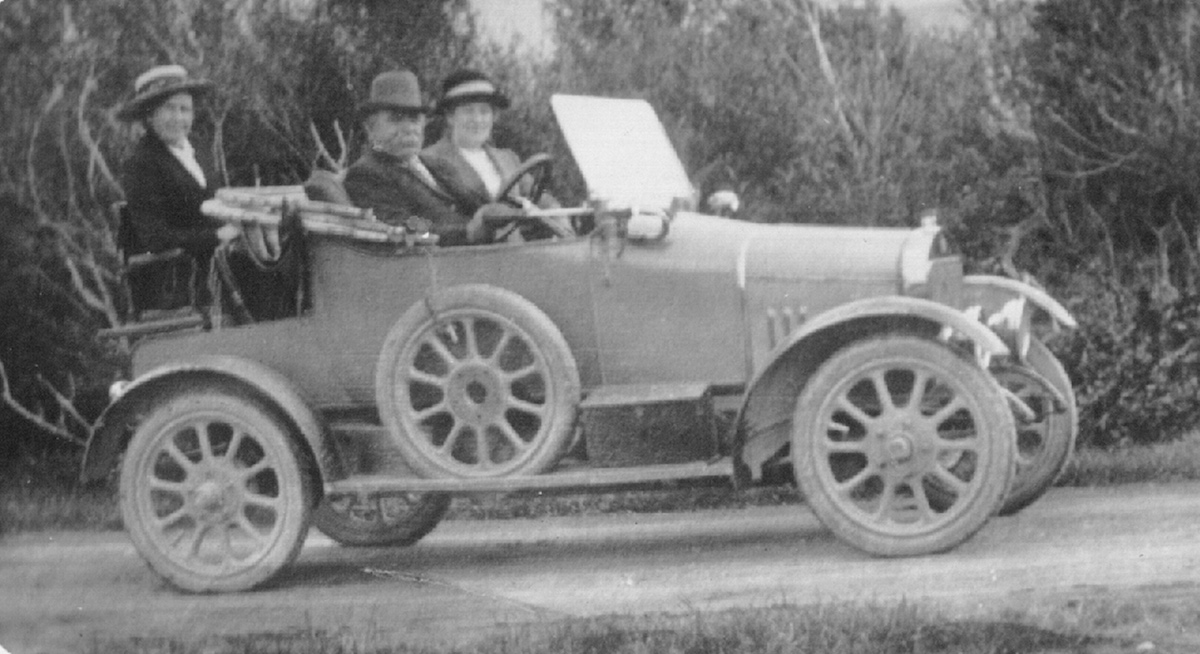 Aaron and Elizabeth Simmonds in the car, circa 1914 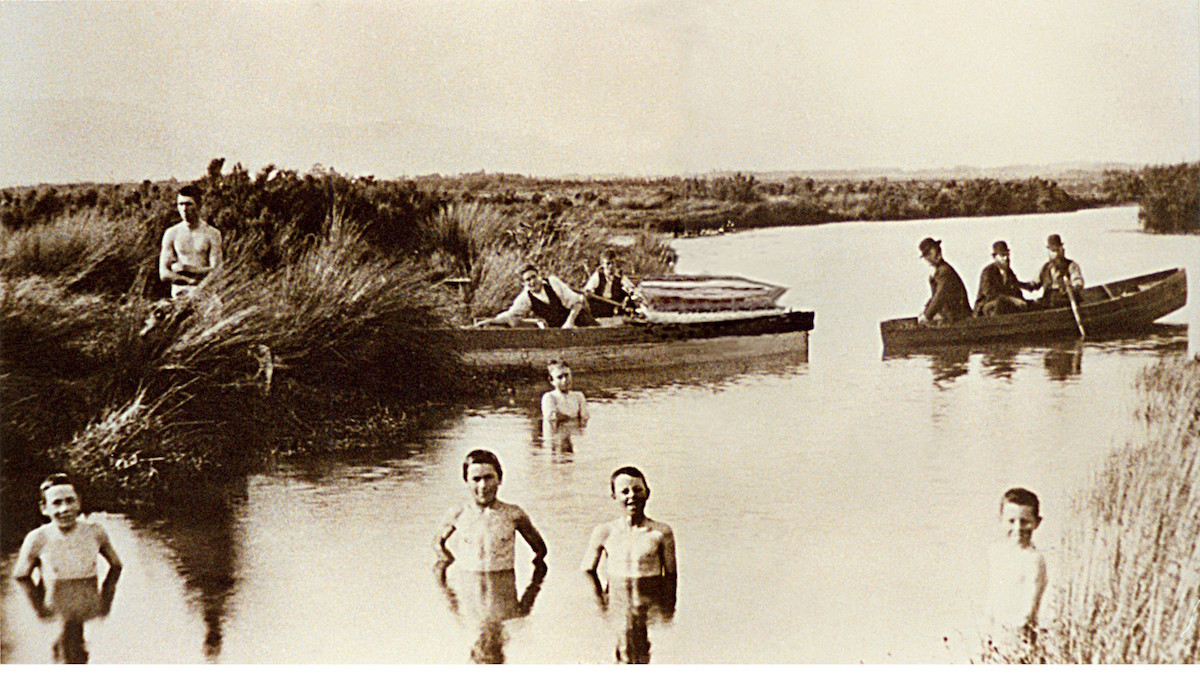 The family at the old Iron Bridge Canal, Lake Wairarapa, circa 1893. From left to right, back row: Os Benton (standing); Chas and Tom Skipage (in boat); Jack Crawford, centre and Aaron Simmonds, right (in boat). Standing in the water: Aaron Frederick Simmonds; William David Simmonds, Will Crawford and Syd Crawford.

LAKE WAIRARAPA TRAGEDY.
2 May 1911. Further particulars of the drowning fatality near Featherston on Monday afternoon show that James Peperell and his son Robert, who are engaged in dairying at South Featherston, with two relatives, Leonard and Walter Rodgers, from Stratford, set out with the intention of having some shooting, and were crossing a lagoon near the lake when the boat which they were in capsized. None of the members of the party could swim, but a young man named L. Donald hearing their calls for assistance, went out in his boat. Leonard Rodgers and the younger Peperell were rescued, but James Peperell and Walter Rodgers were encumbered by the cartridges which they carried, and sank. The bodies were not recovered until 7.30 next morning. James Peperell was a married man, and leaves a wife and six children. Walter Rodgers was aged 15 years. 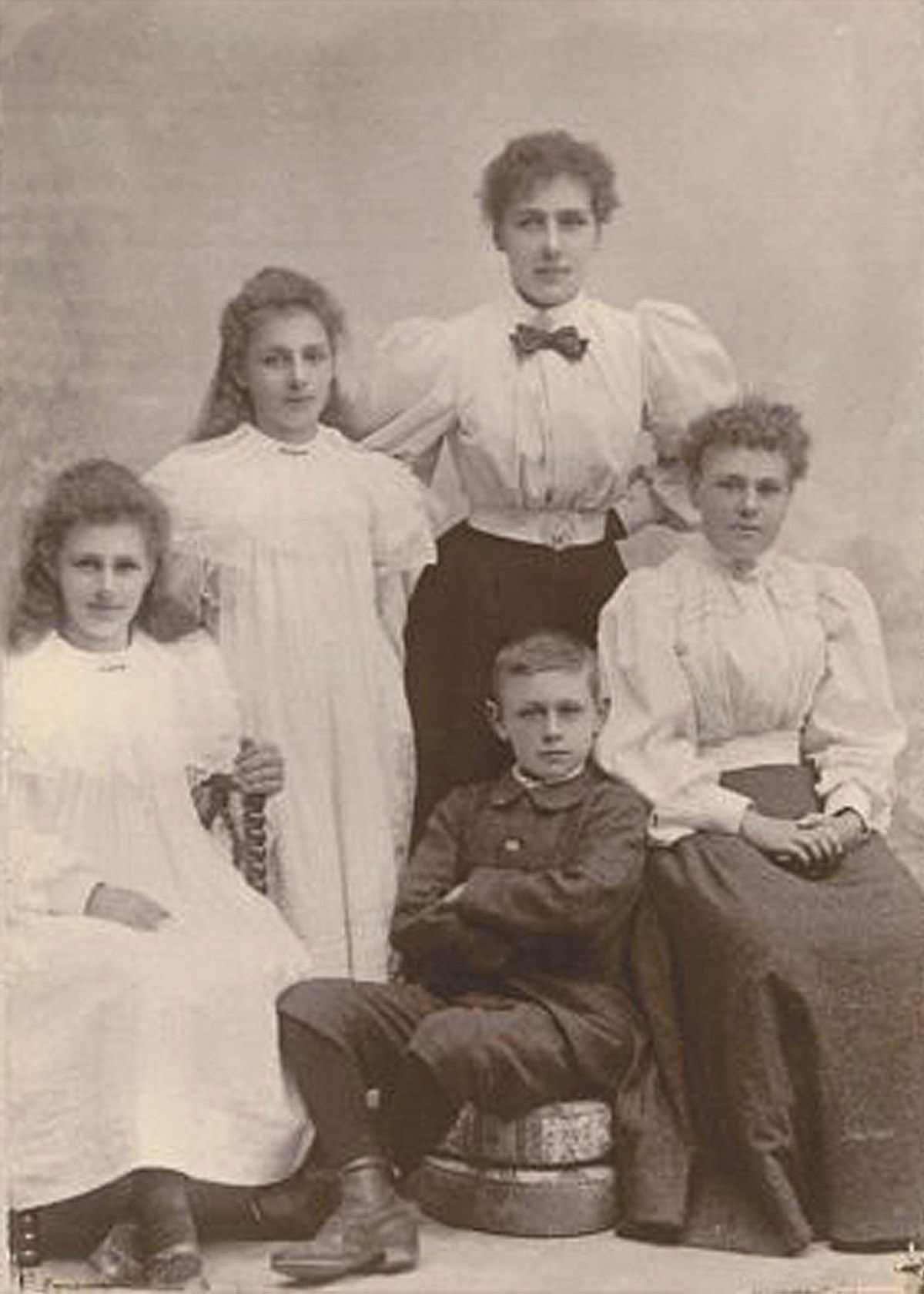 The children of Aaron and Rosa Simmonds (my aunts and father), from left to right; Rosa, Ida, Alice, Ella and Robert Simmonds, circa 1896 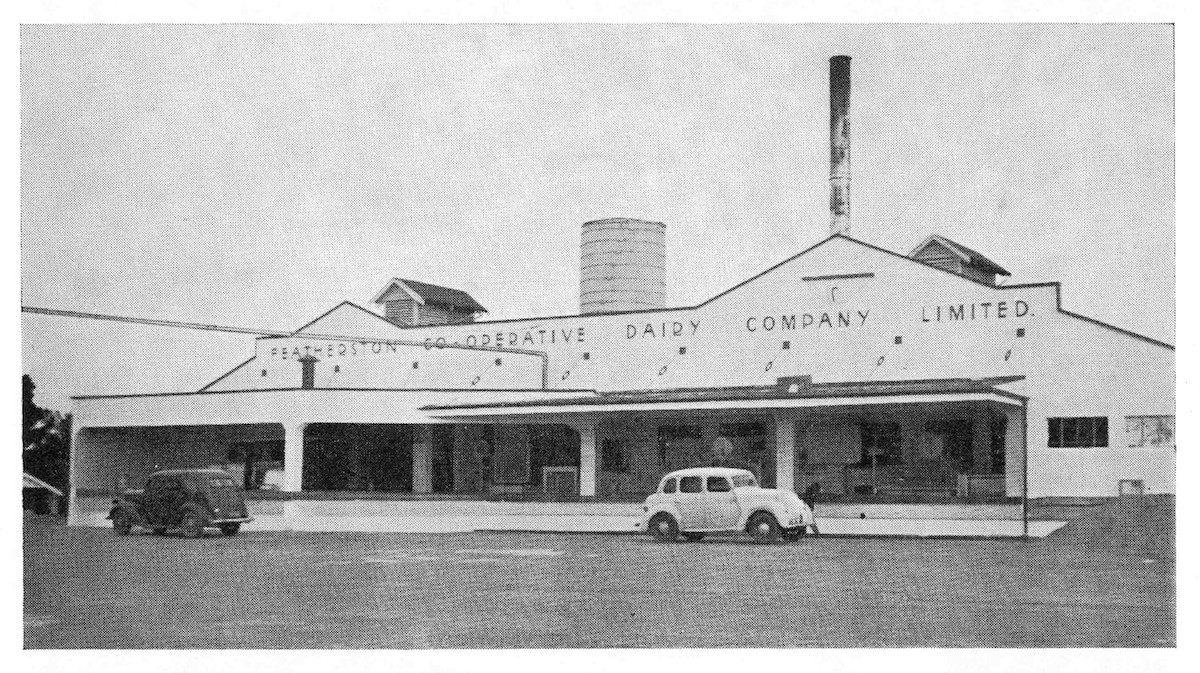 Aaron Simmonds was the Director of the Featherston Co-operative Dairy Company Limited, between 1896 and 1900. Photo circa 1920 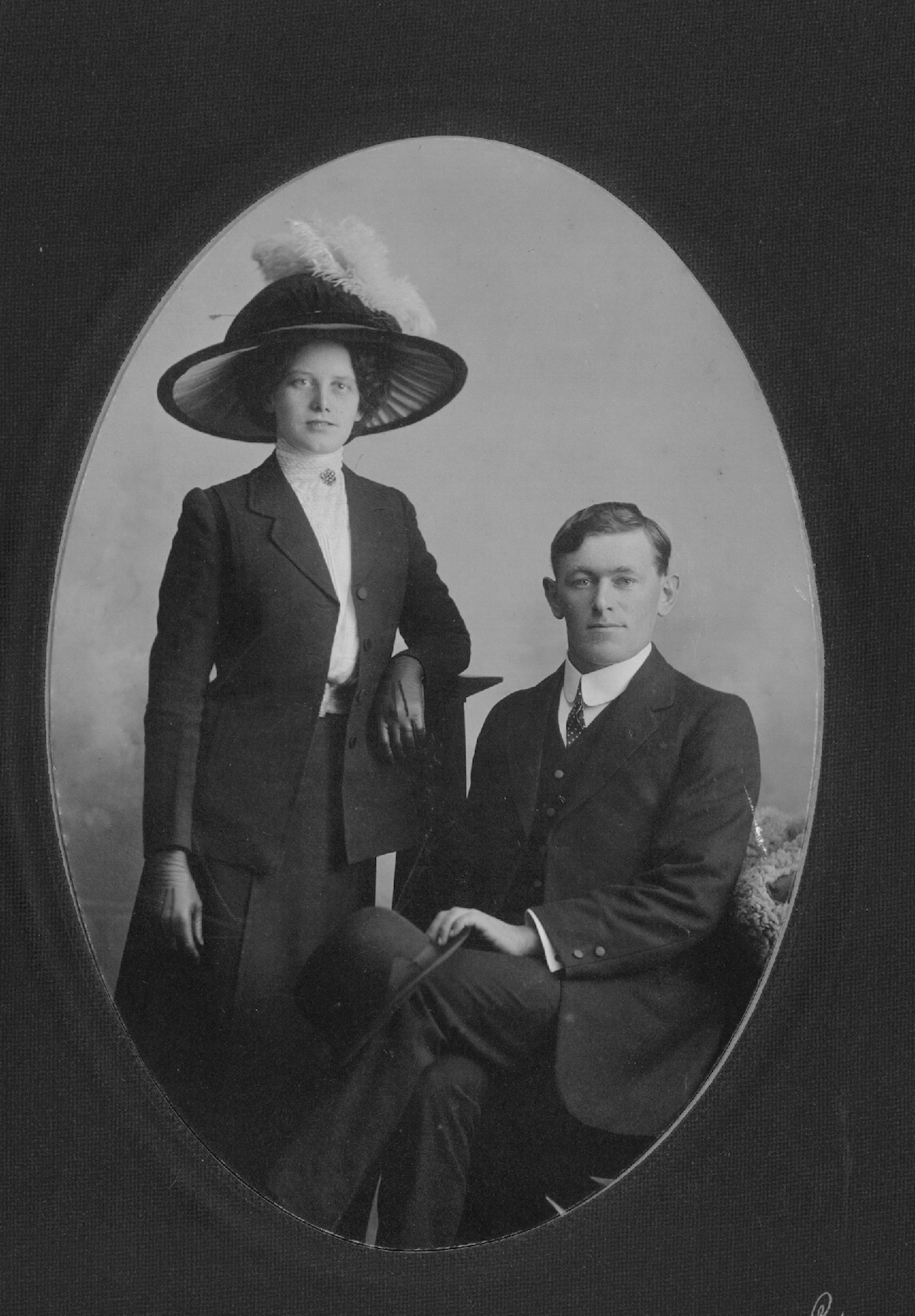 Money was short, as it was for everyone during the time of the 1930s Great Depression. My parents needed to borrow from my grandparents to buy Spring Farm, which they had to pay back as my Grandad relied on that money for his retirement. My parents were hard workers and wise spenders and never had spare money to spend. They thought we’d be that much better off not to use anybody else’s money when we bought Spring Farm. Aware of the potential devastating effects of the Depression, my parents wanted to be protected from banks foreclosing and ensure ownership of the land stayed within the family. However, just up the road there was a milking farm and like many other farmers, they got a loan from the government. After a while their loan was wiped out. The government ended up ‘forgiving loans’ during the Depression and that farmer didn’t have to pay his loan back at all! Hindsight’s a marvellous thing.

My father found himself extremely short of money paying his loan off to his parents and it took a bit of doing. He was a hard worker; he worked down in the swamp digging drains in the freezing water. Of course, when he got older he had no end of trouble with his thighs and knees and became very crippled.

When my mother and father retired from Spring Farm they bought a house at 122 Fitzherbert Street, Featherston. My sister Esme moved in and took care of them until they died. My father (Robert) died on 29 October 1960 aged eighty, and my mother (Gladys) passed away on 1 March 1970 aged seventy-nine. 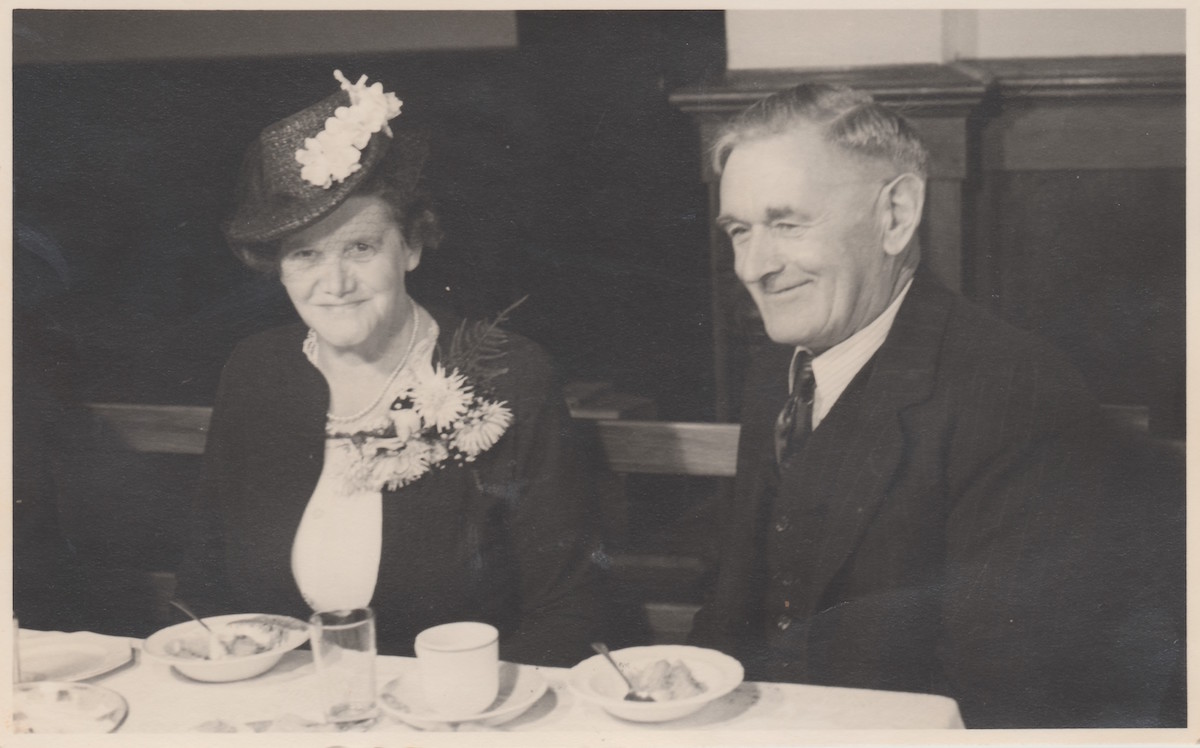 My parents has seven children who were all born in the Kelvin Maternity Hospital in Featherston on Johnston Street, which closed in 1981 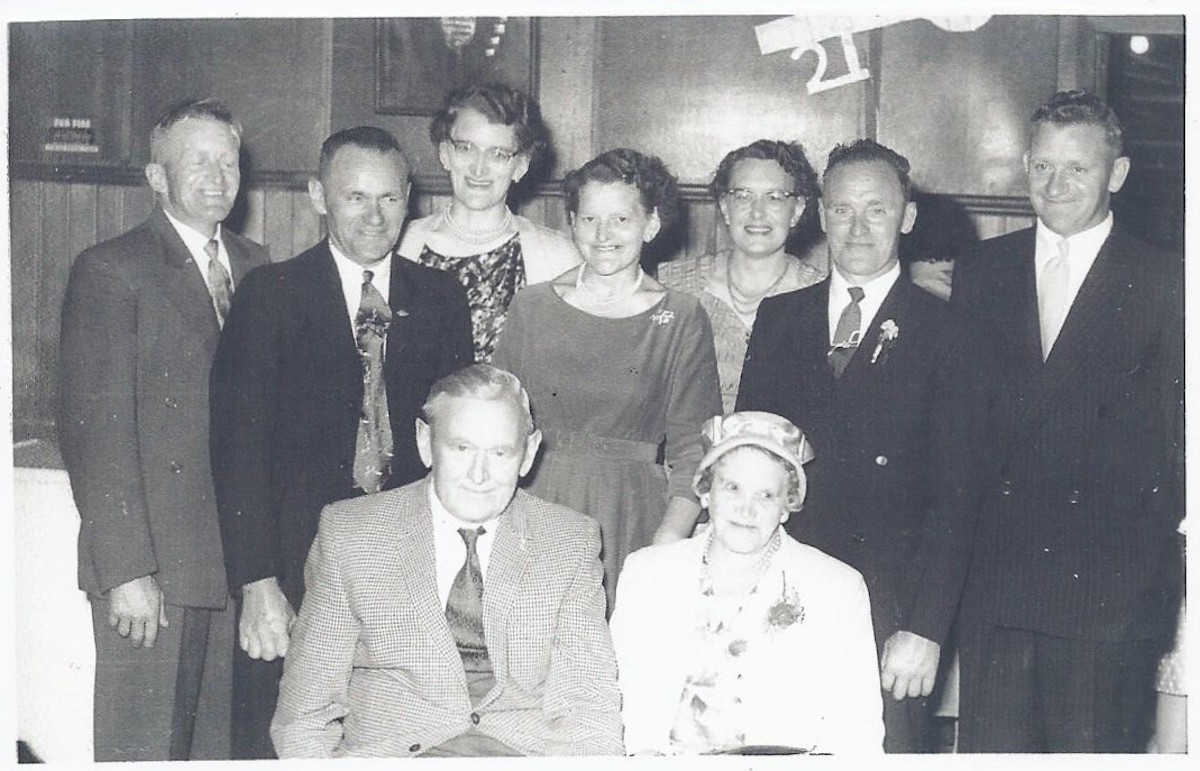 Junket is a simple milk-based pudding dating back to medieval times. A popular custard-like dessert, it was made with sweetened milk and rennet; an enzyme which curdles milk, also used in cheese-making.

Rennet is made from an enzyme found in the stomachs of young animals that have only ever consumed milk. In New Zealand, rennet is made from bobby calves when slaughtered. Heating the milk to ‘blood temperature’ is apparently a new approach; originally Junket was made with milk as it was obtained from the cow already at the required heat.

Warm one pint (600 millilitres) of milk to blood temperature

Add sugar and vanilla to taste

Dissolve one teaspoon of rennet in small amount of water

Knolan Robert (Pop)
Born 2 August 1913 – Died 29 September 1991.
Pop was given his nickname by Dad’s sister, Aunty Vi when she taught him to clap hands and sing ‘Pop! Goes the weasel’ as a child. Pop married Vera Sylvia Scott in St James Church Lower Hutt on 17 December 1938 and was a Bee Keeper. He purchased Spring Cottage and lived there for some years working his bees. He later bought a block of land on which he milked cows at Pahautea, Featherston.

Esme May (Bid)
Born 10 May 1916 – Died 24 October 1994, Arbour House, Greytown.
Esme never married but cared for Mum and Dad for many years at their Fitzherbert Street home in Featherston, while also working at Batavian Rubber Factory. After Mum and Dad died we all agreed, Esme could have the house and she stayed there until she moved into a nursing home in Greytown.

Allen Leslie (Tim)
Born 4 June 1918 – Died 19 July 2002
Tim married Kitty Irene Dorothea Finlayson at Martinborough on 25 November 1944. He served overseas for about two years and then went back onto Spring Farm as a dairy farmer. Aunty Kitty died on 18 March 1986 and Tim remarried Dorothy (Doff) Soughten in Greytown on 27 September 1990.

Betty Iris (Bet also known as Junket Queen)
Born 23 Oct 1923 – Died 17 May 1970, Featherston
Bet was nicknamed Junket Queen by the family because of the wobbly-jelly-like puddings (Junket) she made. Bet married Cyril William McCardle on 15 September 1945 in Featherston. They lived in Wakefield Street and Cyril was a joiner.

John Ian
Born 22 April 1926 – Died 26 January 2005, Masterton Hospital.
John married Mary Josephine Wall on 22 May 1948 and they lived at Battersea, Greytown where he farmed for some years. Later he leased his farm and worked as a builder for a cousin, Rob Skipage.